You have to laugh!

We must a say a big thank you to all the  people who have wished James well for his forthcoming operation – albeit a simple procedure to get the heart back to normal rhythm.  Thereby hangs a story:

Last Friday, while we were still on the boat, James checked his pulse and was surprised to find it had reverted from Atrial Fibrillation (since February this year) to normal!  We were told that this sometimes can happen.  Yesterday (Tues) he had his pre op. assessment where it was confirmed by ECG that this was the case.  His operation was therefore cancelled and he was told to see his GP as his medication may need to be altered.  Armed with a printout of a perfect heartbeat he sat and waited to see the GP, only to feel a fluttering in his chest which could only mean one thing – his heart was back in AF!  Cutting the story short, his doctor was rather taken aback by the sudden turn around.  He made a frantic phone call to reinstate the operation (which thankfully had not been reassigned) organised another ECG to confirm the situation and James is now back to the original plan – a cardio version operation on July 10th.  That’s life! 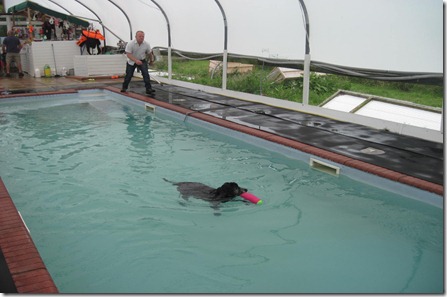 Now being back at home for a while we have resumed “normal” life – which includes taking Oscar for his weekly swim in the doggy pool.