Farewell “Chance” and THANK YOU!

The keys to “Chance” were handed over to the new owners a couple of days ago and we are to meet up with them shortly to familiarise them with all the various workings. We sincerely wish them the very same pleasure that we’ve had over the last six years on this very special boat. 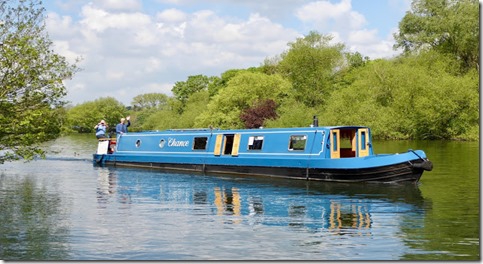 We love this photo of “Chance”, taken by Carol and George from their boat “Still Rockin’” on the River Thames in May this year - and we happen to be waving goodbye as well! 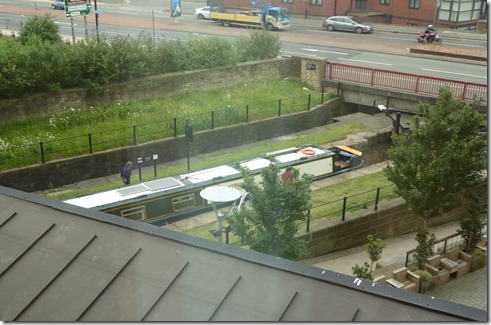 We haven’t really left the canal environment as our recently purchased apartment in Manchester overlooks the first lock on the Ashton Canal. We can spy on the comings and goings below us and there was one boat recently that was familiar to us – nb “Ketura” with Chris and Christine on board. 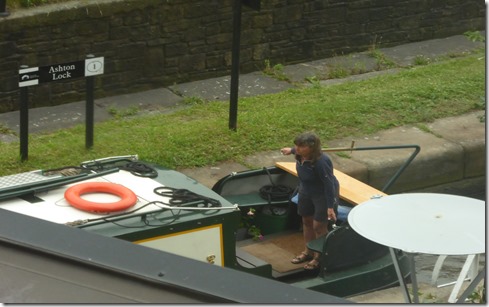 We’d bumped into them quite by chance the previous evening on the towpath of the Rochdale canal but their very early morning start up the Ashton flight of locks rather stymied our chances of grabbing our windlasses from the cupboard (yes we’ve kept a set!) and giving them a hand. 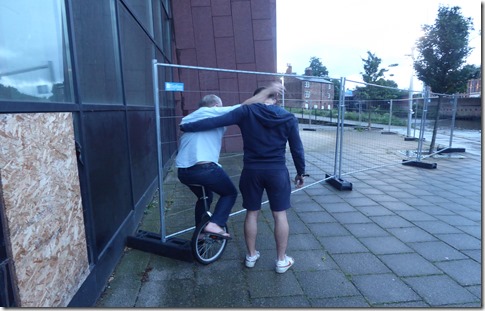 Doug has acquired a uni-cycle (as you do!) and he had his first attempt to ride it just outside our apartment – in a quiet spot where some maintenance work was being carried out. The whole event was rather precarious and took place within yards of the canal! James stood by with the camera just in case there was a chance of winning £250 from “You’ve Been Framed”! 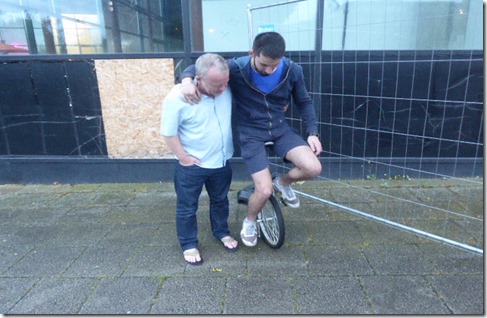 Our friend Cris was on hand to help Doug before it was his turn to try his luck. He should have adjusted the seat height from Doug’s position though! 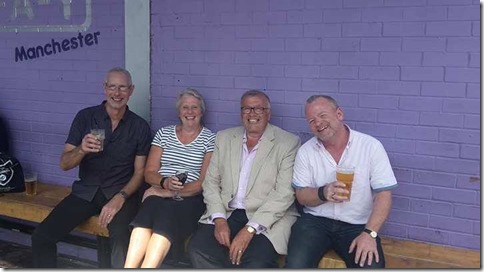 With the decorating and home-making all but finished we soon got down to one of our favourite pleasures - meeting up with friends. On this occasion cruise friends Margaret and Peter came to see us for the day and, after imbibing three bottles of Prosecco between us in our ‘pad’ (thank you M and P for bringing two of them!) we walked down to G-A-Y in Canal Street where, for £1.60 a drink, it was the perfect pit stop on our way to ……… 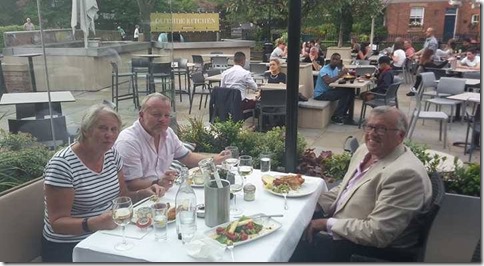 …….. Albert’s Shed in Castlefield for a rather late lunch. The company was even better than the superb food and a splendid time we all had. After lunch it was a walk back to the ‘pad’ for coffee and cake before Peter and Margaret took their leave and headed home. As always, every hour was filled with laughter and we look forward to seeing them again soon. 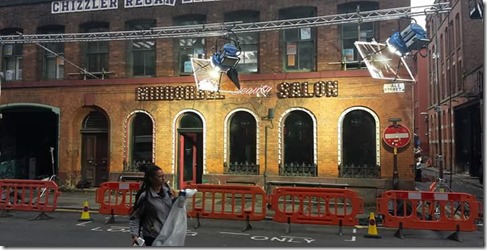 Around most corners there’s something happening in Manchester and, here in Dale Street close to where we are, a new TV series called “Age Before Beauty” is being filmed. 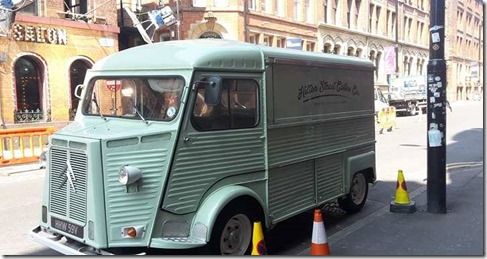 There are various props and period vehicles around the place and occasionally …….. 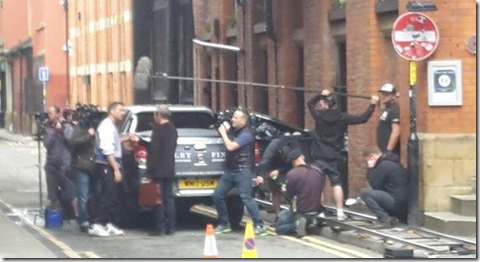 …….. even some action! Here’s one of the stars – Robson Green, standing behind the truck. 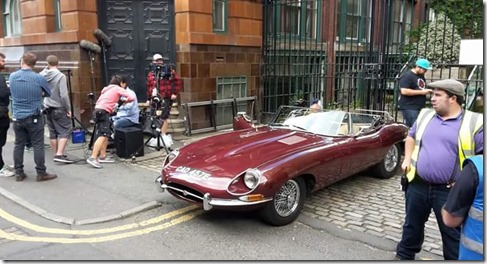 Stars of the human variety are missing from this set but the superb 1967 E-Type Jaguar makes up for it a bit. 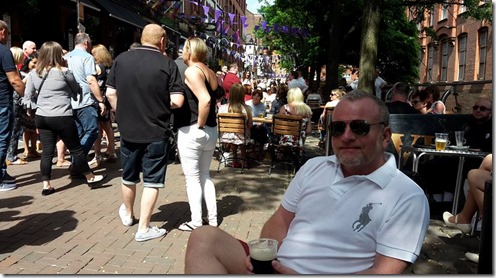 Manchester gets more than it’s fair share of rain but sometimes the sun shines and the city comes alive even more than usual. Here’s Doug looking rather suave and sophisticated on one of the first sunny weekends we had recently ……. 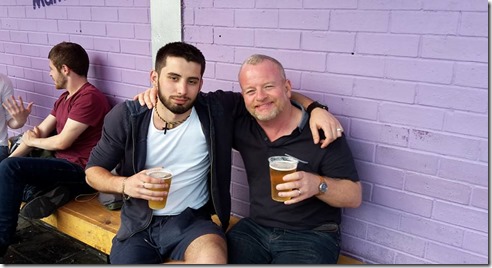 ….. and it doesn’t take long before we meet up with a few friends like Cris and …….. 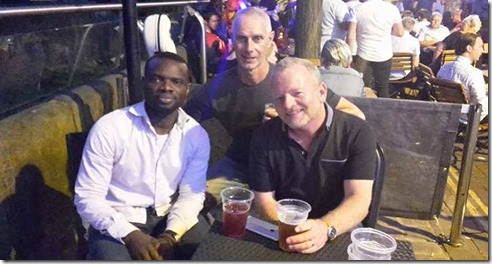 ….. Sammy who happened to be around when the camera was thought about! 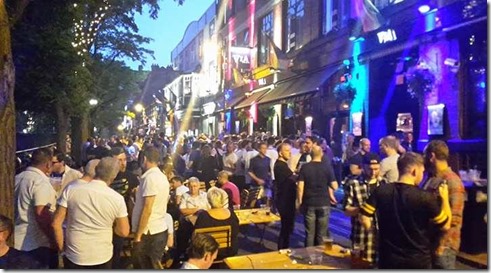 The gay village surrounding Canal Street buzzes with activity well into the evening on such sunny weekends. 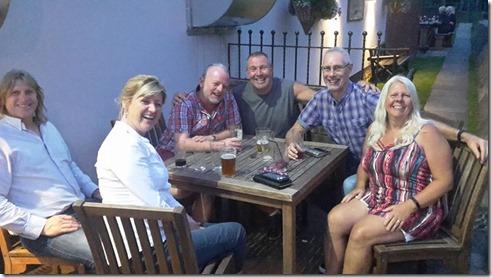 Canals and ‘boatie’ friends are never far from our thoughts and, in this case, not far from us full stop. We drove out to find this rather motley crew on their way to Liverpool! Here’s Mark and Sian (nb "Mochyn Du") and Del and Al (nb “Derwent6”) playing catch-up with us beside the Bridgewater Canal. Soooo good to meet up with these lovely people again! 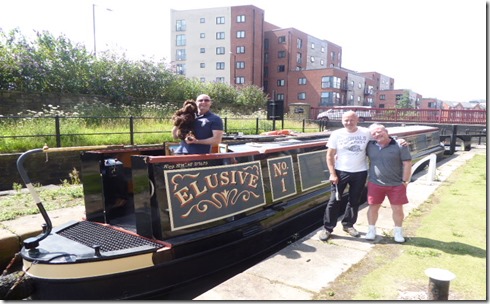 Yet another canal fix – this time very close to home. We’d tracked friends Chris and Tim in their boat “Elusive” coming down the Ashton flight of locks and met them at “our” lock at the bottom. 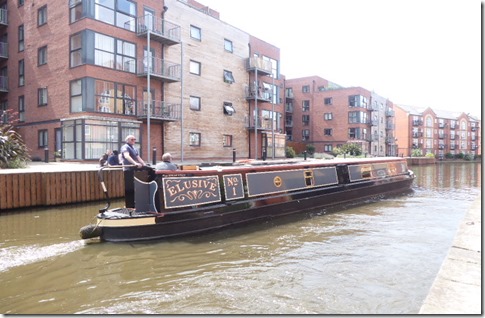 It was a short distance to Piccadilly Village where they intended to moor up so Doug cadged a lift with Chris on “Elusive” while Tim and James walked beside. 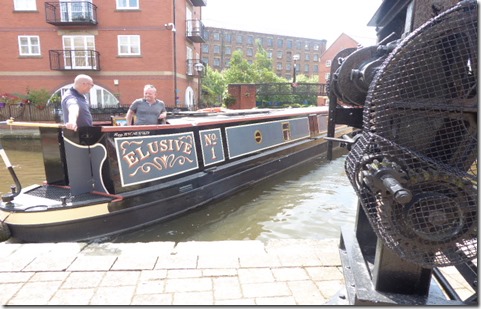 It was a tight turn into the little basin but Tim managed it very well. 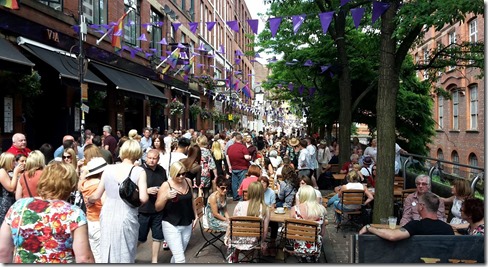 This last weekend turned out to be beautifully sunny again and perfect for Manchester’s annual celebration of the national transgender charity event – “Sparkle”. As usual, Canal Street was heaving with people enjoying each other’s company and promoting diversity in society. 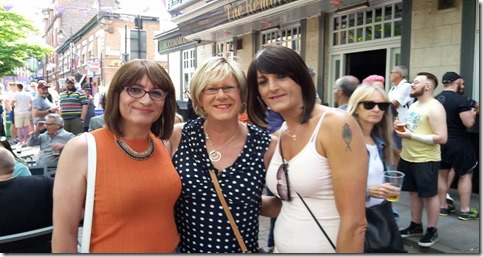 Here are three happy people who’s company we enjoyed out of the thousand or so who attended the weekend’s celebration. 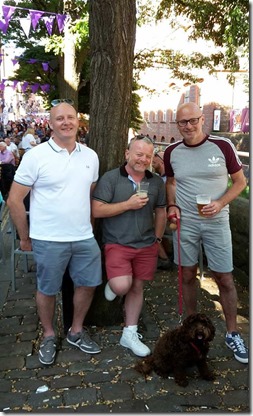 And it was good to meet up with Chris and Tim (and their pretty little dog Peggy) again in the afternoon after we’d helped moor up their boat and enjoyed a cup of coffee with them afloat earlier. Great to meet up again guys.
Life has been rather hectic recently (what changes?!) but we seem to have settled into our “northern crash pad” rather well. We’re looking forward to spending time at both ends of the country, meeting up with friends, making new ones and exploring the north of the country in the future.
Posted by nb Chance at Wednesday, July 12, 2017 No comments: