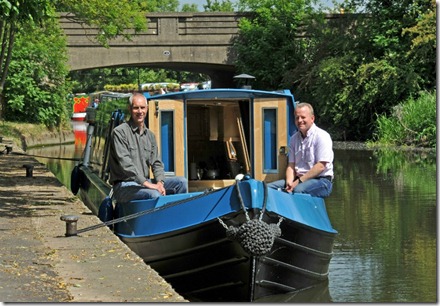 As we are in the midst of some very dull and uninspiring weather right now we thought we might use a picture with a much brighter feel in order to extend our best wishes to all of you for a very Happy New Year.  Here we are at the start of our cruising back in May - so much has happened since then and we now find ourselves making plans for the next year.  We hope to do the full length of the River Thames, including the Kennet and Avon when we get to Reading, and then into, and out of, London before the Olympics get under way.  After that we hope to venture onto new territory and explore east of the Pennines.

As we’re missing the lifestyle a bit at the moment we are planning to use ‘Chance’ for a week in early January (if the weather permits!).  James has nearly finished refurbishing the wood surround for the rear deck – the new varnish is looking really good - so we’ll take that back with us when we go and there’s sure to be a few mid winter jobs to do while we’re back on the cut as well.  It’ll give us something “proper” to blog about as well!

So, once again, a very Happy New Year to you all.

Now the season’s upon us we would just like to thank all of our followers for reading our blog this year and for all the comments we have received. We would like to wish you a Merry Christmas and a happy, healthy and prosperous 2012!

If you want a giggle click on the e-card below: 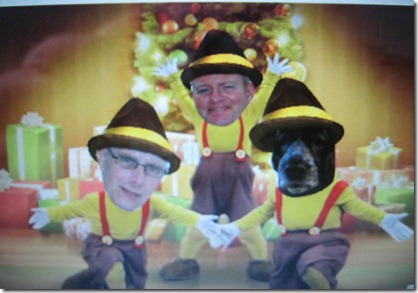 Posted by nb Chance at Wednesday, December 21, 2011 No comments:

Having decided to cash in the remaining portion of this years’ licence and take out a gold one for next year we asked BW if they would process it asap.  Within a week and a half we have our new licence so we give credit where it’s due. Well done BW. 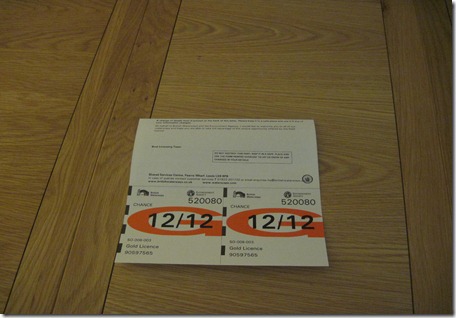 We’ve been on our travels for the last week visiting family and friends around the Oxfordshire / Wiltshire border and visited the pretty little market town of Faringdon in Oxfordshire.  It was an important town during the sheep trade in the 1600’s and it has, over the last 20 years, resurrected some of  its old charm by a lot of renovation work and removing much of the awful render from the beautiful old stone buildings. 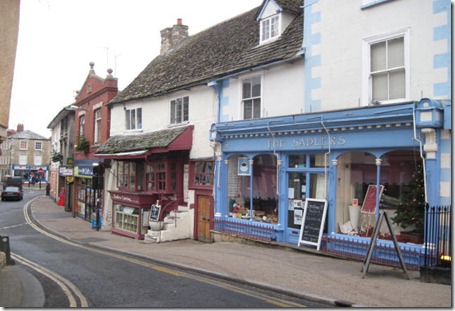 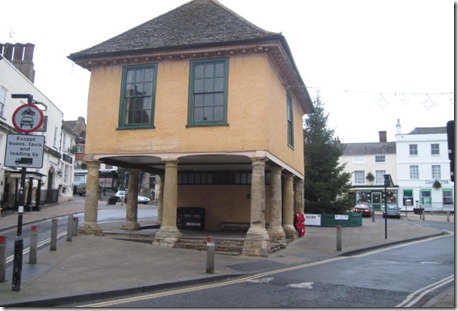 Until the bypass was built,  all the traffic on the A420 would rattle past this lovely old market building. 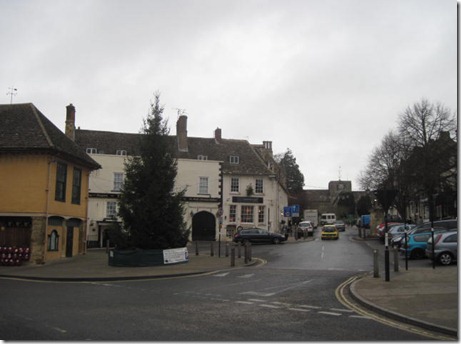 The Market Place looking towards the church – the spire was knocked off by Oliver Cromwell!
From Oxfordshire we head South West for Watchet in West Somerset to see friends who have recently moved there. 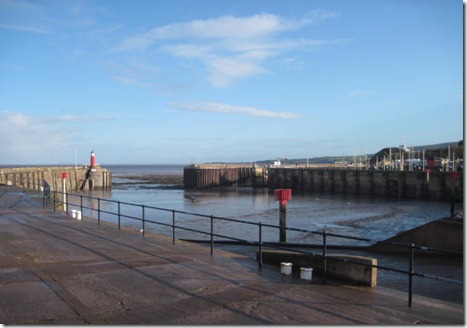 The outer harbour at Watchet – used to be full of fishing boats. 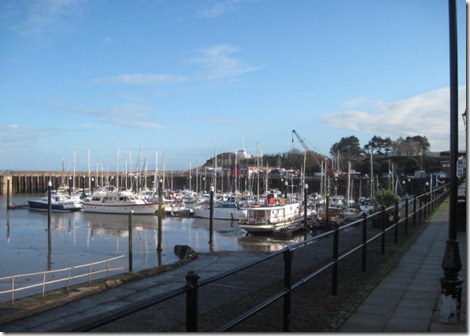 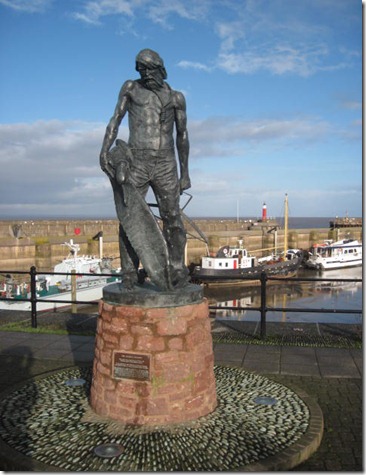 We then continued onto Devon for a few days, so James could have the rest of his dental work completed.

Getting back home a few days ago we discovered the sea wall at the end of the road had taken a severe battering during the storm last Monday night. 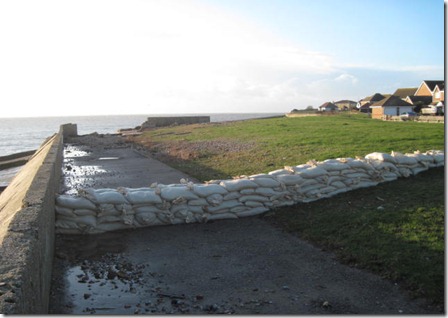 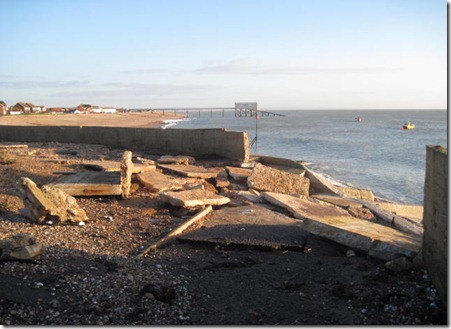 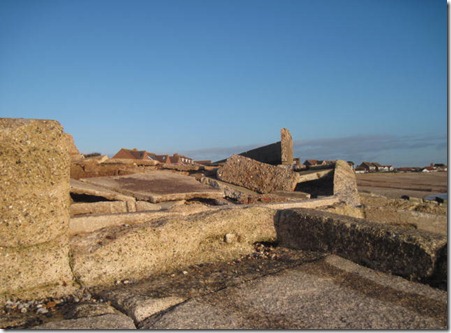 Anyone know of a good builder?
Posted by nb Chance at Sunday, December 18, 2011 4 comments:

This weekend we’ve travelled up to Oxfordshire to see the family and to meet up with friends we haven’t seen this year.  While we were in the Aldermaston area we popped in to see Tom and Jan on nb Waiouru on the Kennet and Avon canal.  We hadn’t seen them since they came out with us on ‘Chance’ for the day last May and so we had a good catch up with them.  It was good to see that work is in progress on nb Waiouru now.
We’re now staying with Frances (youngest daughter) and Kel for the weekend before going down to Devon next week to get James’ dental treatment finalised.  However, before we left…….!
……….James just had to do something “boaty”.  So, having brought the woodwork home from the rear deck for refurbishment he started sanding down the old varnish.  Although it still looked very good the weather was starting to take its’ toll and another year would certainly have reduced its’ appearance. 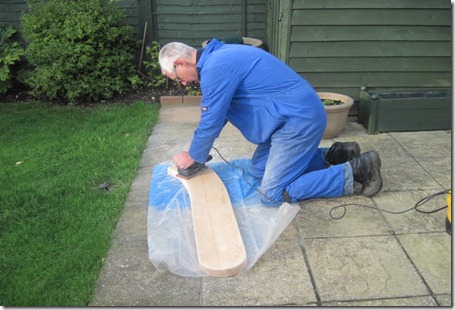 Getting both side pieces back to bare wood before the supply of sanding pads ran out! 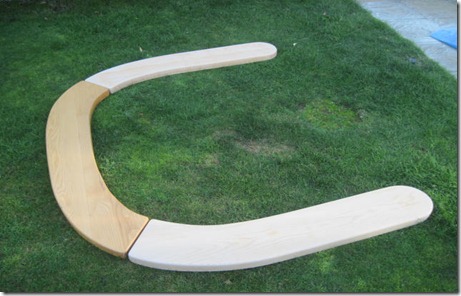 At least the difference can be seen!
Posted by nb Chance at Friday, December 09, 2011 No comments:

Getting your Ecofan refurbished.

Like a  lot of boaters we have an Ecofan on “Chance”.  Ours is about 4 years old now.  We had it on our previous boat and it then took a holiday with friends for 2 years in France!  where they used it on their wood burning stove in their farm house.  Deciding they no longer needed it, it came back to us this year just in time for us to use it on ‘Chance’. 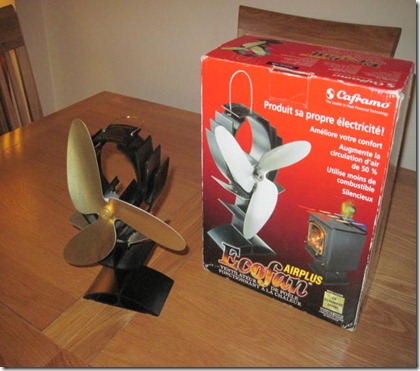 After a bit of use we noticed that the blades didn’t spin as fast as they used to so we searched the internet for a new motor, which costs about £15.  Then we came across a company called Calfire  who advertised a refurbishment service.  The estimate, if the motor needed to be replaced, was about £25 including a full check up and return postage.    So, glad that we kept the box, we sent if off and it was returned as good as new for £22!  The motor was replaced and they provided a test certificate as well.  Worth every penny we think when you consider the cost of a new one.  We’re delighted with the service we’ve received.