On our recent trip to Ireland, to catch up with Doug’s sister and family in Cork, we took the opportunity to pick some sloes (a pleasure we thought we wouldn’t get around to this year!). 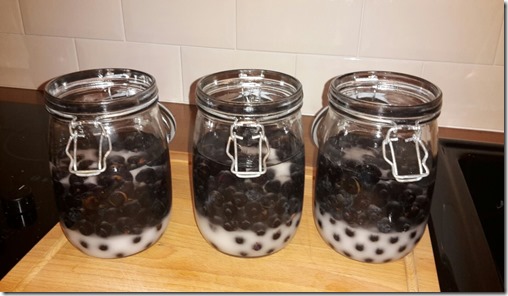 So – now in jars, it was ‘picked in Ireland and recently brewed in Manchester’ (and may well be consumed in Selsey, who knows? 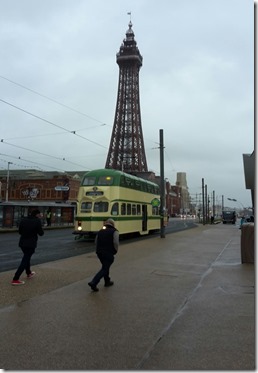 Well, autumn came with a vengeance on 21st October - the day we picked to go to Blackpool for the “Funny Girl’s” Halloween show. 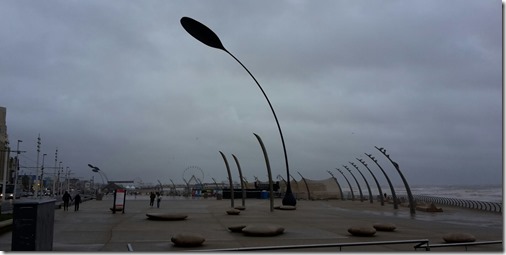 Storm “Brian” hit the the country and the wind certainly blew hard on Blackpool seafront! 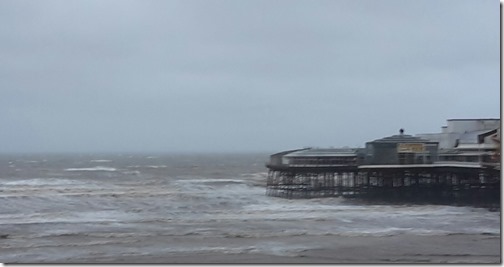 The tide was out during the daytime when we were there so the waves weren’t crashing against the seawall thankfully. The piers were closed and parents were hanging on to their children ……. 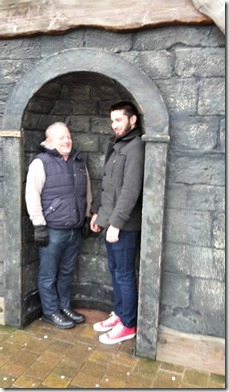 …….. and it was ‘any port in a storm’ for us as well as other people! Here’s Doug and Cris (who wouldn’t miss an invitation to join us to go to “Funny Girls”)

The dear old Winter Gardens was a good place to hunker down from the increasing severity of the storm as the afternoon wore on. 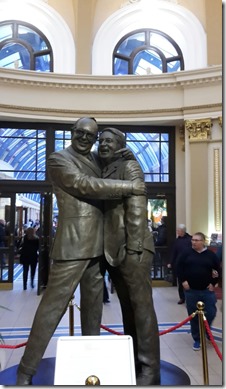 Inside, even Eric and Ern seemed to be bracing themselves against the wind! 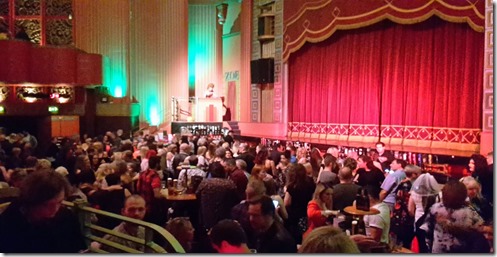 Having survived the afternoon in the company of “Brian”, the evening came and it was time for the highlight of our trip. “Funny Girls” was packed in an anticipation of what we had in store for the evening’s £8 entry fee (only £4 on week days!). 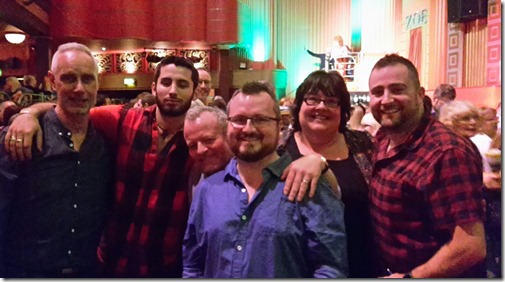 Almost immediately we struck up a delightful evening friendship with three people from Bournemouth. James, Cris and Doug with Roy,Tai and Gay, (their lovely adopted mum and Fag-Hag!). Oh, these things can get very complicated (!) but we had the most fantastic evening with these guys who were enjoying their first visit to “Funny Girls”. 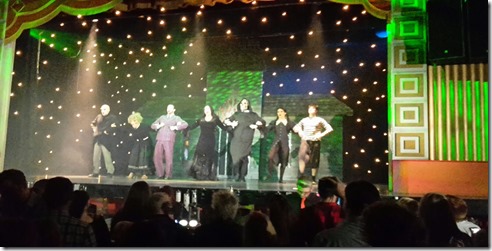 There were seven cabarets during the evening – all headed by the indefatigable “Betty ‘Legs’ Diamond”. 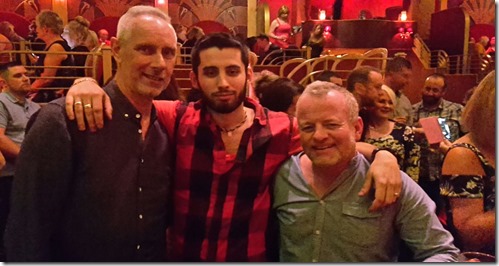 You’ll notice there’s quite a lot of lolling about on people’s shoulders in “Funny Girls” - here’s three of the Manchester contingent doing just that!. 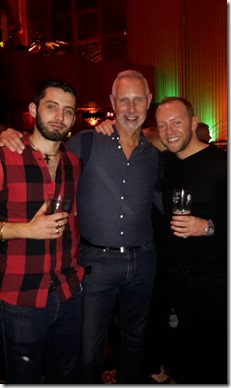 There’s quite often a minor celeb or two in the audience – this time we met up with Dan from Dancing on Ice. 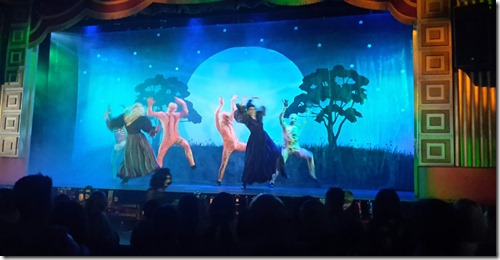 The cabarets are extremely good and great fun …… 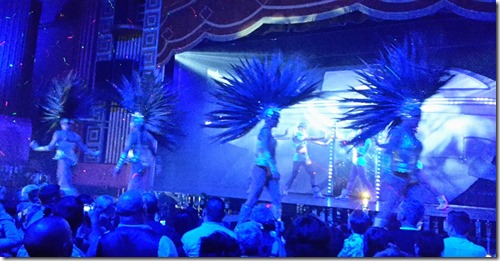 ……… but the finale was literally ‘out of this world’ with it’s cosmic, space travel theme. And the costumes were incredible! 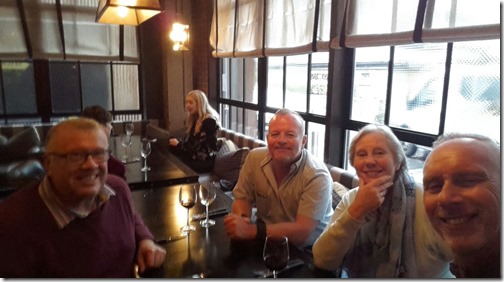 We didn’t stay over in Blackpool but drove back early on Sunday morning (poor James, going without a drink!). In Manchester and we soon had a visit from friends Peter and Margaret (think it was only a week ago we were together at their home!). They don’t live far away so it’s a quick train ride for either of us to get together (such a blessing and very normal in this narrow bit of the country). After the usual drink or two we ventured down to Spinningfields for lunch – the sunshine through the windows prevented a proper pic so this selfie (with James pulling his usual selfie face) has to suffice. 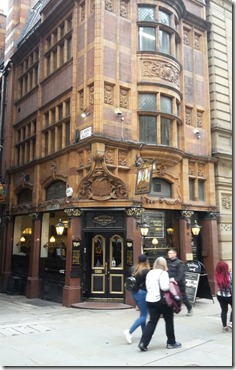 On our walk back home we popped in to one of the many fascinating old pubs the city has to offer. This one, in this amazing building, is “Mr Thomas’s Chop Shop” ………. 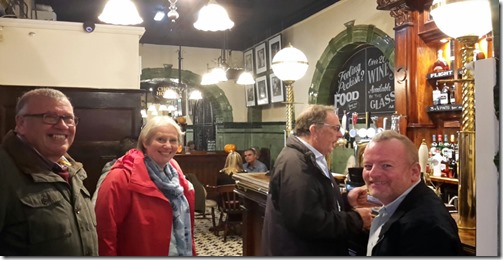 ……… and inside, where you can eat as well, we enjoyed a few very nice gin and tonics proffered, like expensive cocktails, by the obliging barman. Its well worth a visit! 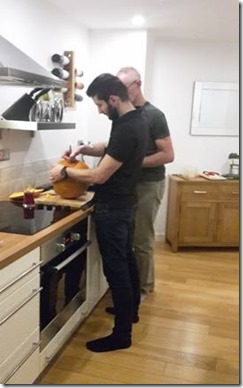 Halloween was bearing down on us next (not something we’re very excited about accept that Doug likes to carve a pumpkin or two) and he wanted to compete with friend Cris (who, incidentally had never carved a pumpkin before!) for the best attempt. James, who has zero interest in such things, was given the position of judge. Here’s Cris marking out his design ……. 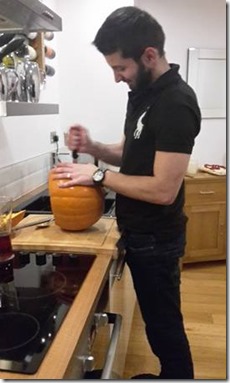 ……… and here he is going for it like an expert! 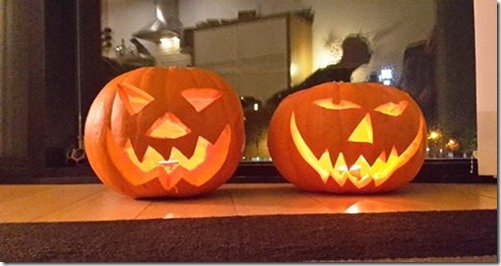 James’ unbiased opinion was that Cris’ had the best overall effect. Not something that Doug was prepared to accept so they both decided to put it on Facebook and let friends decide. It was like the results section of the Eurovision Song Contest that night – waiting for the results to come in! Doug won by an extremely slender margin – of two! 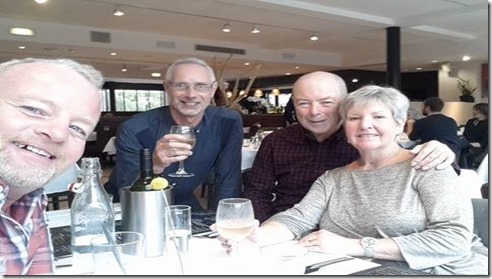 This Manchester malarkey certainly is showing it’s benefits – we had a visit from friends Chris and Linda, who we haven’t seen for a year. They too don’t live far away so, another short train journey brought them to us and again, after the usual bubbly at home, it was to Albert’s Shed again for lunch. 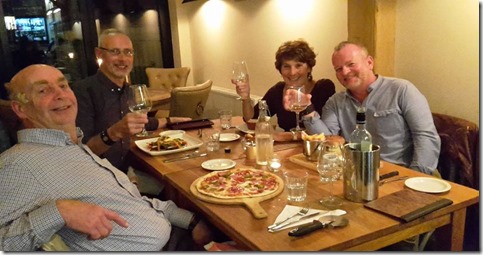 After a short breathing space of a few days we drove up to stay with our Lake District friends Geoff and Pam and, after a painfully slow trip up there (it was Friday!) we went out to dinner that evening at a hostelry not far away. The food was splendid but, as always, the company was better. 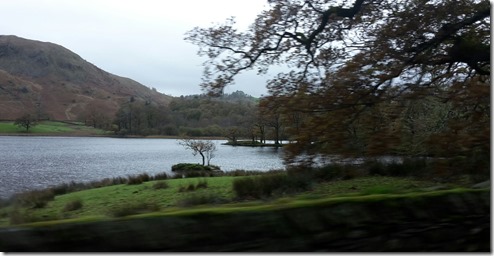 On Saturday they took us on a trip to the northern end of the Lake District during which we passed  Windermere, Grasmere, Rydal Water, Thirlmere and Bassenthwaite Lake. An interesting point – Bassenthwaite Lake is the only “lake” in the Lake District. All the others are either “Meres” or “Waters”. This one in the pic is the lovely little Grasmere. Thirlmere is a reservoir which supplies water to Manchester 96 miles away. 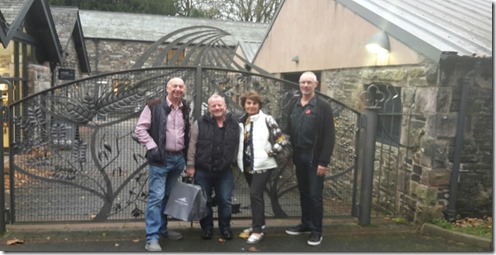 Our destination for the day near Keswick was the Lakes Distillery. Beautifully renovated from a dilapidated set of farm buildings it’s been open and distilling for almost three years. During that time it has been producing and selling vodka and gin but, as it’s primary product will be whisky and that needs to have been laid down for “three years and a day” before it can be called and sold as whisky, they are selling a blended product in the meantime. 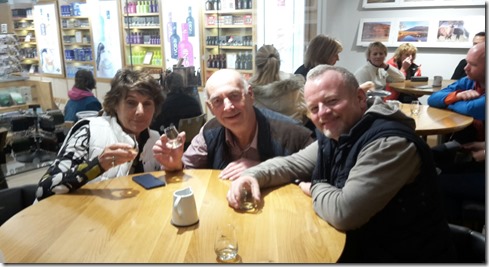 We went on a fascinating tour of the distillery – learning all sorts of amazing facts before settling down to a little tasting session. Not being whiskey or vodka drinkers, and only drinking gin (for medicinal purposes) in watered down form, it wasn’t an easy task knocking back the various products that were put in front if us. But we did it nevertheless! Here we all are!!!! 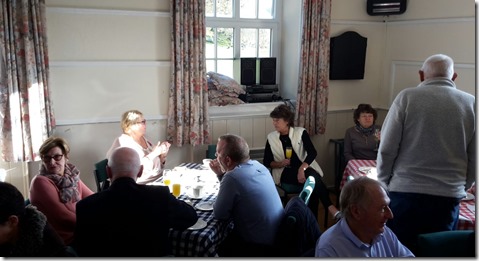 After a splendid dinner party that evening back at Pam and Geoff’s (with several invited friends to join us) there was no time to lie in on Sunday morning as we were off down the road to Finsthwaite. There we enjoyed a three course breakfast at their annual Big Breakfast fundraising event for St Peter’s Church. We met up with quite a few more friends we’ve got to know in the Lakes over the last year. 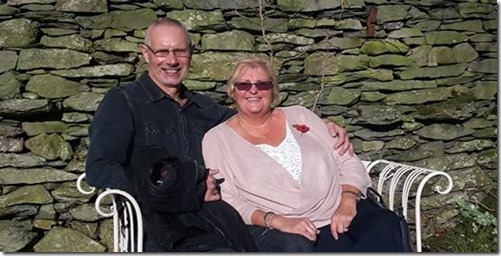 Then, for several of us, it was back to Pam and Geoff’s to spend the rest of the day relaxing (James and Chris were caught enjoying the sunshine together in a lovely peaceful spot in the garden!). 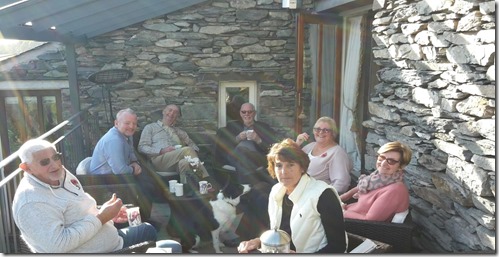 During the splendid early afternoon sunshine Peter, Doug, Geoff, John, Chris, Geraldine, Pam (and James) all had tea and coffee on the terrace before retiring to the comfort of a roaring log fire for the rest of the day.
At about 8 o’ clock that evening we had to say our farewells, and a sincere ‘thank you’ to Pam and Geoff for their boundless hospitality, before driving down to Selsey and arriving in the early hours of Monday morning.
Posted by nb Chance at Wednesday, November 01, 2017