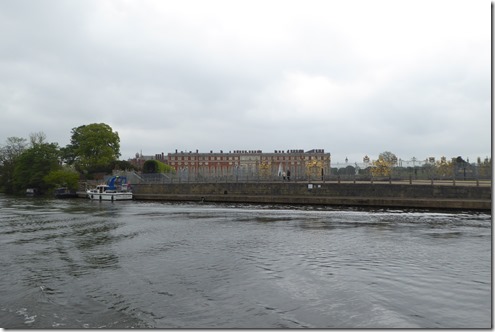 Well, our journey along the (controlled) part of the River Thames was almost over and we were about to enter the tidal stretch for a short while. First, though, cruising past the fabulous and unique Hampton Court can’t be done without a photo. Sadly, we didn’t have to time to moor up outside and soak up the ambience and onwards we went …….. 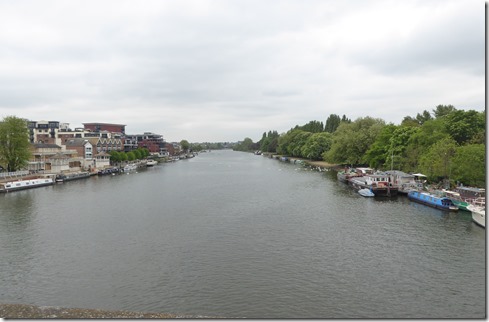 ……. towards our mooring for the night in Kingston-on-Thames. It’s a marvellous view upstream from the Kingston Bridge. We’re moored somewhere on the far right by the trees! 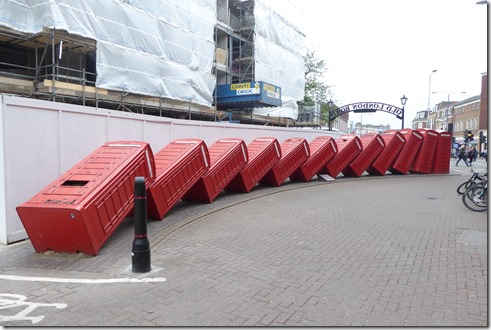 A walk around the town wouldn’t be complete without a photo of the famous telephone boxes. 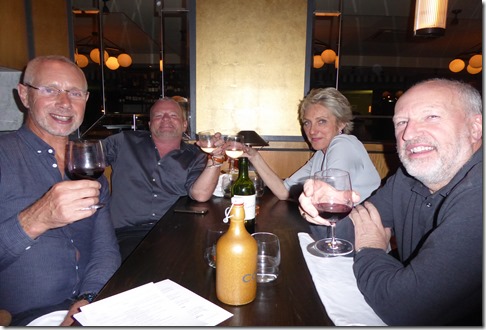 The main point of our stop in Kingston was to catch up with friends Anita and Alan who we dined with every evening on our recent Caribbean cruise. We had another wonderful dining experience with them, this time in Cote Brasserie. 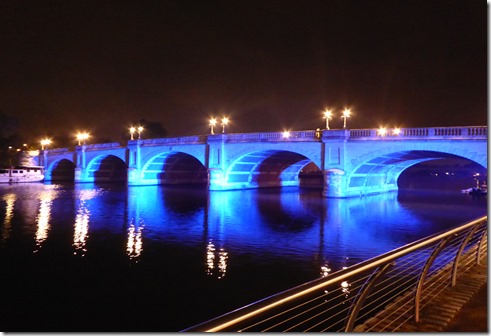 The evening view of Kingston Bridge from the embankment is stunning. 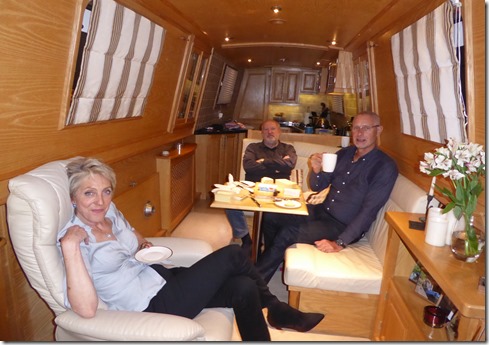 Anita and Alan came back with us (walking across the fabulous blue bridge) to “Chance” for coffee - but the cheese and biscuits soon came out as well and the fabulous evening was rounded off nicely. It was lovely to catch up with them both again! 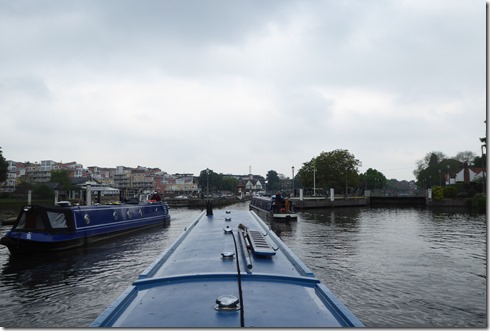 The next morning we had to be at Teddington Lock at 09:30 to be locked out and onto the tidal section of the river for our journey into Brentford. Here we are entering Teddington lock. 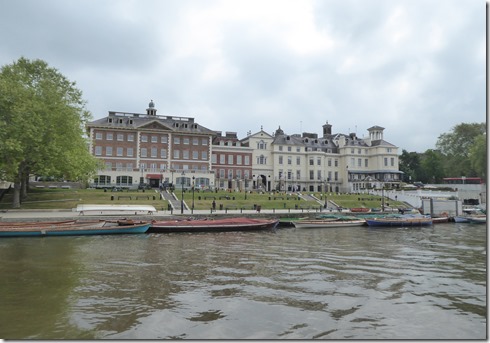 One of the most charming sights on the 1 hour trip to Brentford is the river frontage at Richmond. 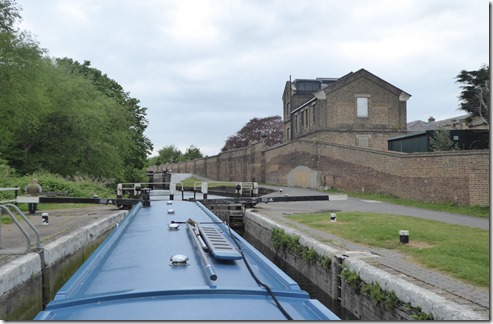 We were soon off the tidal Thames and onto the Grand Union Canal at Brentford. Passing quickly through the Thames and Gauging locks we were  onto the Hanwell flight of six locks (known as the “Thick of Hanwell” by the old working boatmen). The building dominating the locks here is the old Victorian mental asylum. 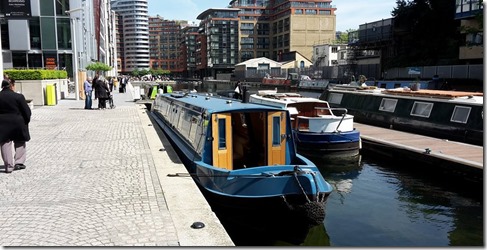 The long day’s cruising from Teddington ended when we reached our goal of Paddington Basin – our ‘home from home’ in London it seems! We have been immensely lucky that, on the many occasions we’ve visited, we always managed to get a mooring. 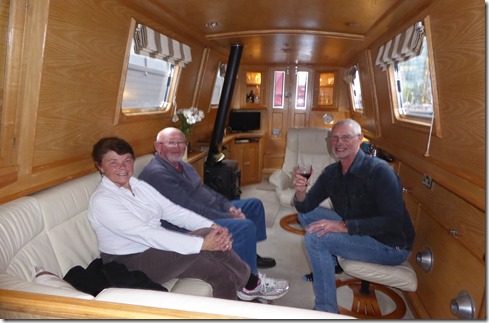 We weren’t moored very long before we had an impromptu visit by ‘boatie’ friends Heather and Roger (nb Celtic Kiwi, on their annual boating holiday from their home in Australia. 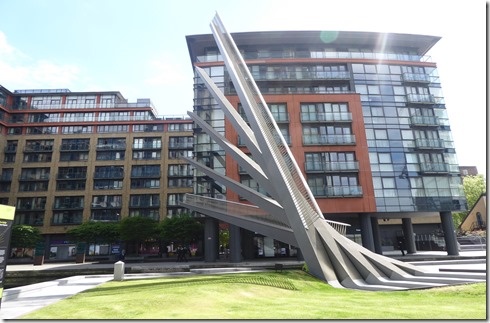 We’ve watched the redevelopment of Paddington Basin over the years – it’s now complete and one attraction is a spectacular second bridge which is raised periodically as an art form. 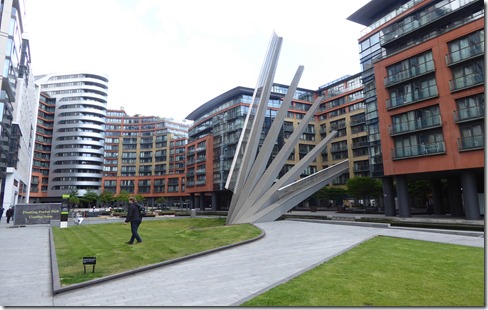 It looks lovely but it’s a bit of a hindrance (haha) when you want to use it and have to walk all the way round! 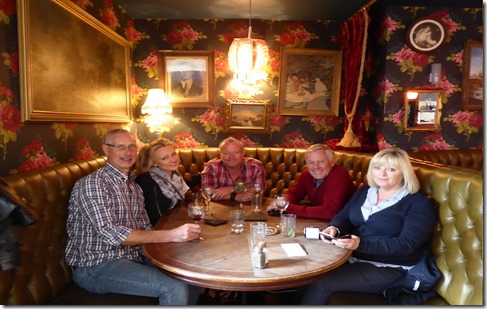 We had another lovely visit by local Sussex friends Alan and Kim and their daughter Sophie. They were ‘in town’ for the day and we’d arranged to have lunch with them. 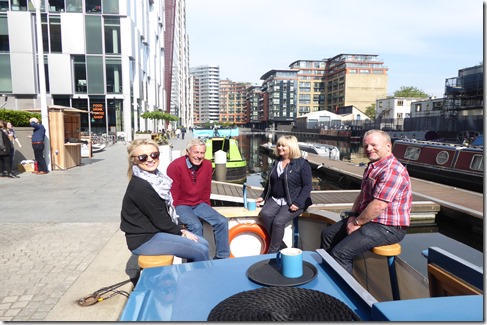 After lunch there was time to have a coffee on the rear deck of “Chance” before they all headed off again. It was a real treat enjoying your company guys. 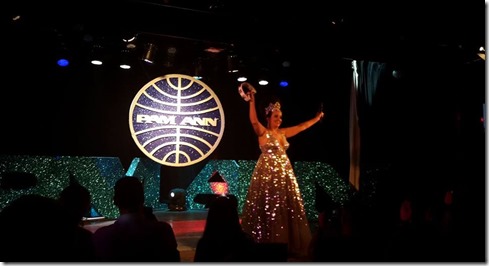 We had time during the week to see a couple of shows in the West End. At the Leicester Square Theatre we enjoyed “Pam Ann” in her bawdy, “say it as you mean it” show based on her ‘experiences’ as an air stewardess on her own airline! At the end of the show she allowed us to take this pic. 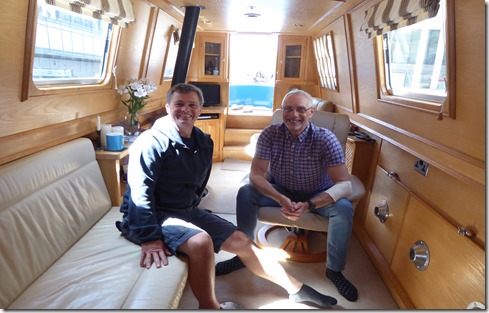 We had another ‘knock’ on the boat during our stay in Paddington, this time from friend Nick (nb Marpessa 2) who was moored in Little Venice for a few days and noticed us as he walked through the basin. We had a great catch-up chat for an hour over a coffee so thanks for popping in Nick. Give our love to Emma please - it was such a pity she wasn’t with you! 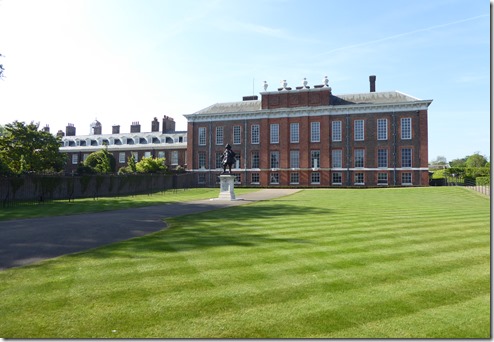 We hoped, in vain sadly, to visit the Diana, Princess of Wales costume exhibition in Kensington Palace but could not get tickets on the day so …….. 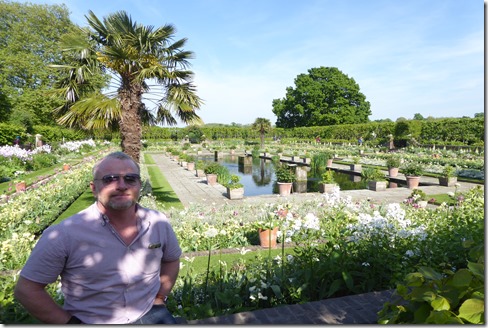 …… we made do with a visit to the White Garden which the Palace gardeners have created this year to commemorate the twenty years since Diana’s death. 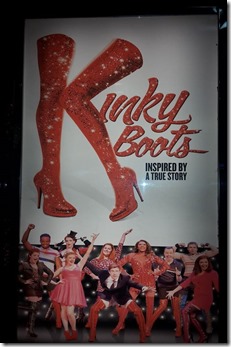 The second West End show we saw was the much acclaimed “Kinky Boots” at the Adelphi Theatre. 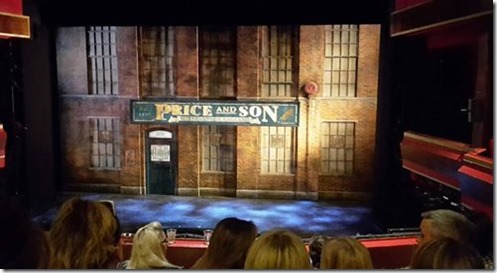 As always, there was a ban on all forms of recording during the performance so this one is of the basic stage set. It really was, as so many have said, totally amazing. Simple but clever scenery and first class performances by all the cast – it’s well worth a visit.
Posted by nb Chance at Tuesday, May 16, 2017