We left our mooring at Wrenbury on Saturday morning and, after a couple of swing bridges we were soon at our first lock. 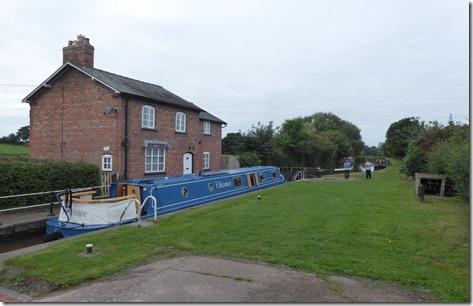 Marbury lock has a pretty and well kept cottage next to it and heralds the start of a quartet of locks with the consequent (and rather quaint) names of Quoisley, Willey Moor and Povey. 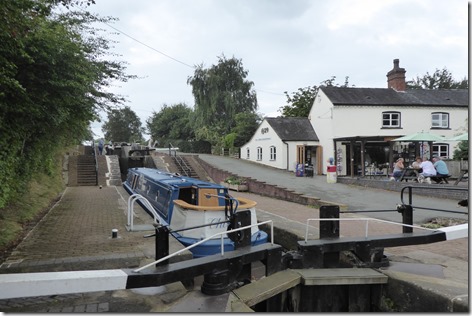 A bit further on and we tackled the six locks at Grindley Brook. The last three being a staircase set next to the busy little café where the “gongoozlers” can sit and watch us over their elevenses. 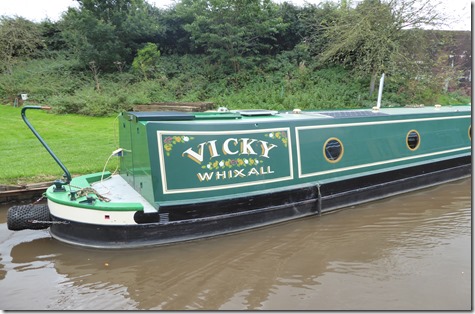 Along the way we come across a boat with a name we know well -  this is for you Vicky B! 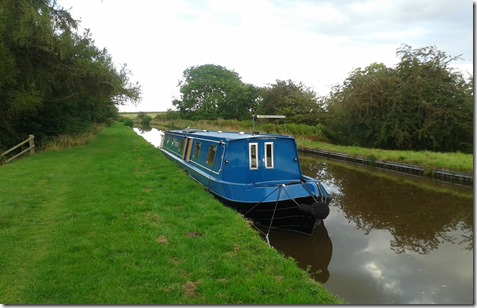 We tackled the horseshoe bend and lift bridge at Whitchurch soon after Grindley Brook and then, before long, found ourselves in the middle-of-nowhere. It would have been sacrilege not to take up the offer of a delightful mooring in this picturesque area around Fenn’s Wood. 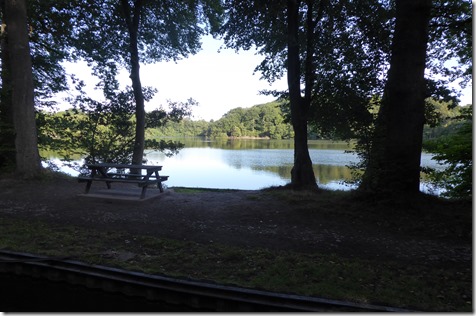 Sunday morning didn’t start off with the intention of a big push forward but it turned out like that in more ways than one.  After the rather boring mile long straights before and after Prees Junction (although they do border the lovely Nature Reserve known as Fenn’s, Whixall & Bettisfield Mosses) we passed from Shropshire into Wales and were soon enjoying the lovely Meres either side of the canal approaching Ellesmere. The heavy, tree-lined section of the canal at this point gives only tantalising bright glimpses of the waters on each side. 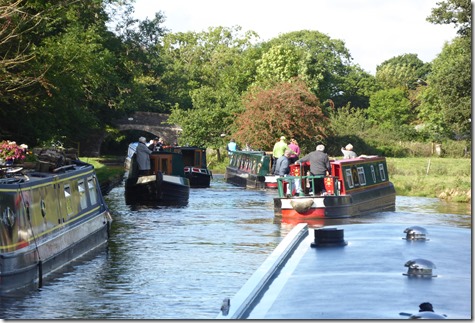 After the Ellesmere junction our comparative solitude changed rapidly with the most hire boats we’ve ever had the misfortune to experience. Two hours of hilarious chaos was our enjoyment – we’d happily have bought tickets for the entertainment value! 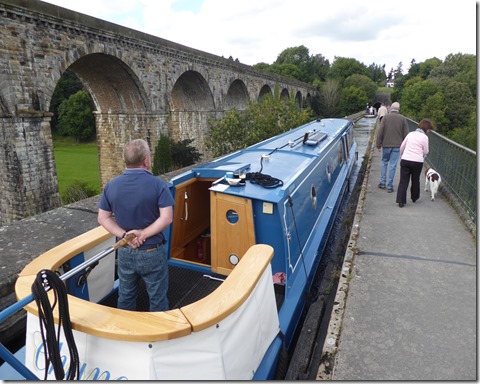 The hours passed and so to did Frankton Junction where the Montgomery Canal branches off. We continued on and eventually, after a tedious hold up at New Marton locks (where the aforesaid hire boaters had their very first encounter with a lock! – and where Doug volunteered his enthusiastic and efficient labour to get ten hire boats and their bemused crews through in an hour), we got to the superb Chirk Aqueduct. Paralleled by the railway viaduct as well, it’s a good practice run for the next  aqueduct ………. 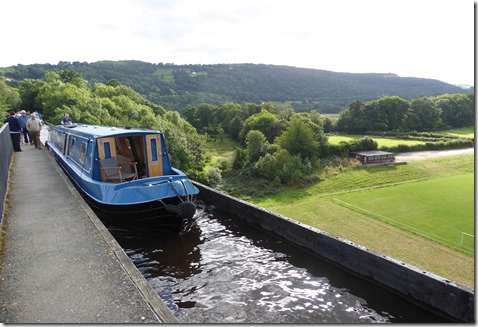 ………. the 1000 foot long, 127 foot high Pontcysyllte! Pronounced ‘Pont-ker-sulth-tee’ it’s famous for putting the fear of God into many narrow boaters – including James! 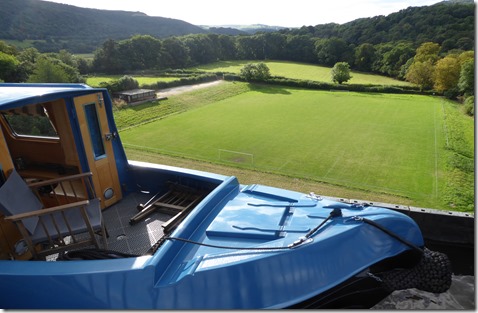 It consists of an iron trough supported by eighteen stone piers. Completed in 1805 it’s, arguably, Thomas Telford’s most outstanding achievement. 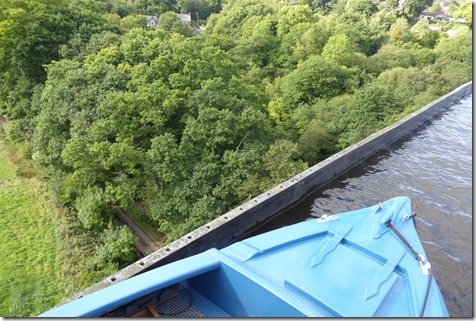 The tiny, four inch thick trough wall is the only thing that stops us from plummeting down ……… 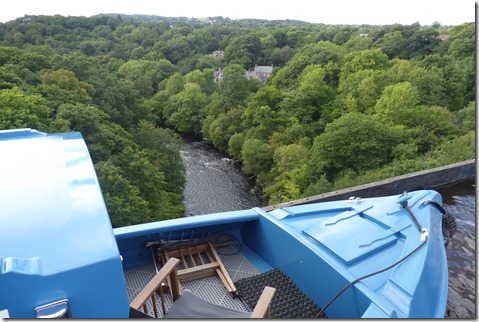 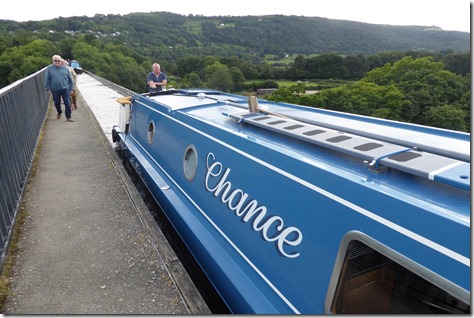 That’s why James walks across and Doug has to steer! 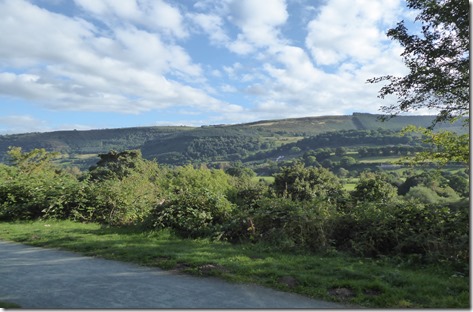 Immediately after the aqueduct the canal branches sharp left at Trevor and we were then onto the last leg of our journey to reach the end of the line at Llangollen. The reason for the enormous ‘push’ to get the miles under our belt this Sunday was because of the chance of a first meeting with some fellow boaters and blog readers who were already at Llangollen and about to leave on Monday! The scenery gets very “Welsh” on this last section with glorious views mountains, valleys, hills and trees. 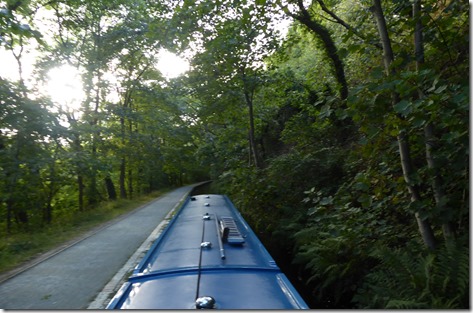 The ‘push’ took on a different meaning as we tackled two sections of one-way working. The canal is so narrow that only one boat at a time can use it. Along with the difficulties of the narrow channel is the fact that a proportion of the River Dee has been diverted is flowing against us! It seemed that someone had decided to divert a bigger percentage of the river than we’d experienced on our last journey up to the pretty Welsh town and it seemed to take forever as “Chance” struggled against the flow. 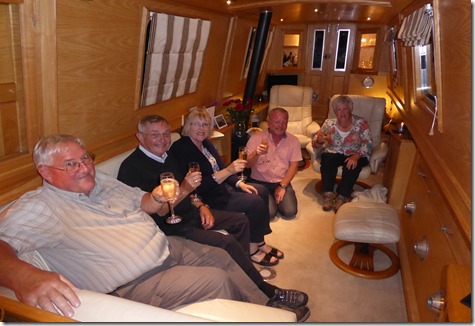 Once in and safely moored up in the Llangollen basin we entertained the folks we’d ‘pushed’ to see after our ten hours of cruising – from nb “Cleddau! and nb “Tentatrice” we met Ken and Sue and Chris and Jennie. They were the perfect guests of course as they brought two bottles of Champers to celebrate our long awaited meeting. Ken, Chris, Jennie, Doug and Sue. The long day’s travel was very much worth it as we had a lovely, laughter filled evening together. Very nice to meet you all and safe cruising! 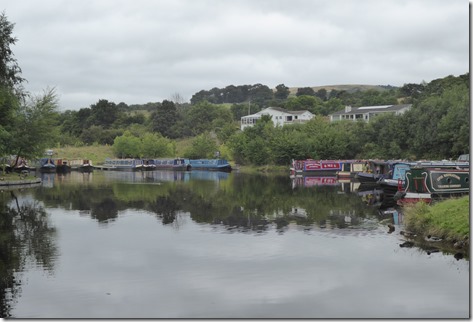 On Monday we had a walk up towards the far end of the canal, where the river is diverted to form the canal, and on the way got a lovely view of the basin with “Chance” in the far corner. 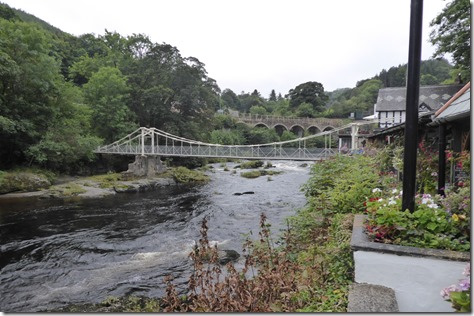 The aim of our walk, apart from gaining some well overdue exercise, was to visit the Chain Bridge hotel at Berwyn and the adjacent, and recently restored, Chain Bridge. 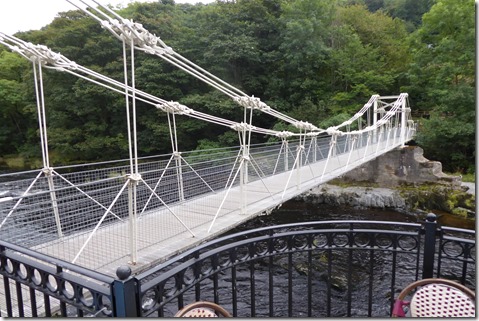 Made perfect again in 2015 it’s said to be one of the oldest chain bridges in the Western World and it had been languishing unused and deteriorating since the 1980’s. 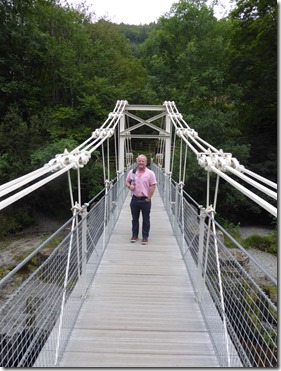 It’s been beautifully restored and, true to most chain bridges, it’s rather bouncy when you walk across! Guess who was the first to jump up and down? 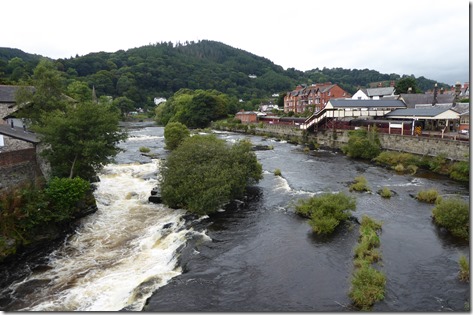 Getting the bus back from Berwyn to Llangollen saved our legs on the two miles distance (what happened to the exercise?!) and we had time to enjoy the town with the swift flowing River Dee running through it. 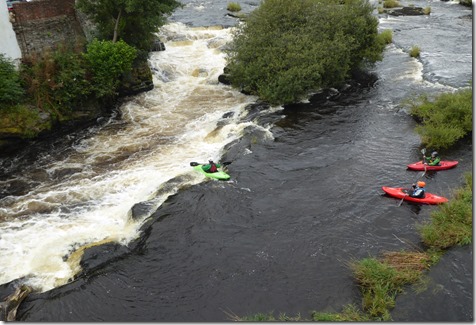 We were in time to witness some very skilful kayaking on the white water rapids next to the town bridge (all three successfully tackled this spot) before enjoying a late lunch in one of the many pubs available. 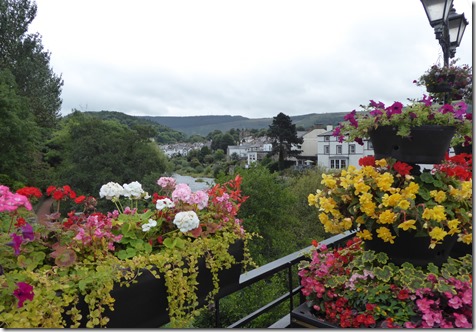 As always, Llangollen puts on a wonderful floral display around the town for the benefit of its summer visitors.

Returning to “Chance” mid afternoon and we had time to get some housework done and for James to make progress on some winter preparation and maintenance before hunkering down for the evening.