Narrow to Broad and Memories of Nora Batty 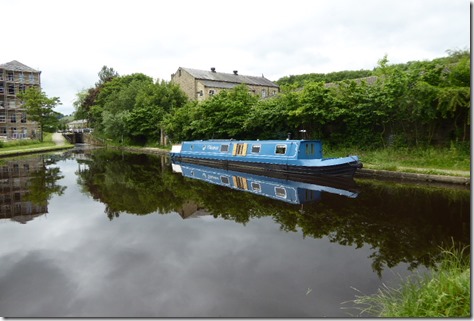 This was our very peaceful moorings in Slaithwaite where we spent a couple of nights. We had some great local ‘chish and fips’ on the second evening with Pauline and Neil on board. James tried again to do a bit more straightening of the bent prop as an interim measure but we’ve ordered a new one and will be looking out for a suitable boatyard to effect the replacement. 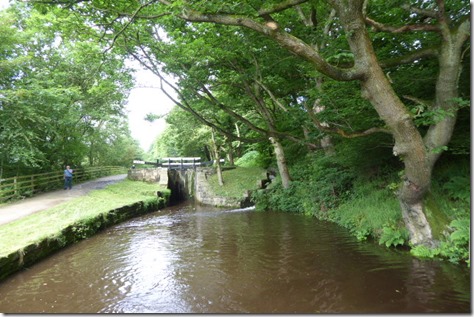 Moving on from Slaithwaite the canal ambience, since the Standedge tunnel, has been a delight - even if most of the locks are not!  …………. 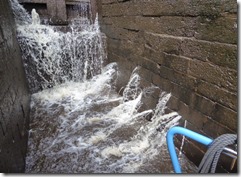 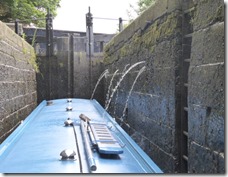 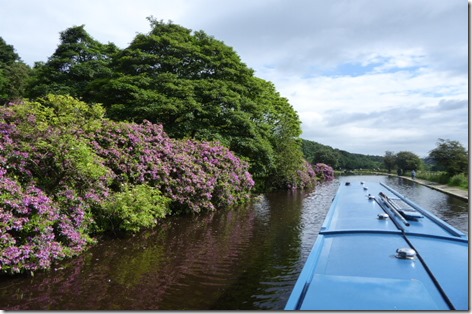 Gorgeous rhododendrons on one side of the canal ……… 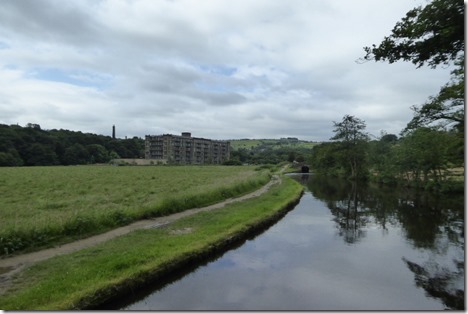 ………. and vast expanses of countryside - hills, trees, fields and, in this case, the massive bulk of Titanic Mill on the other. It now houses flats rather than textile machinery. 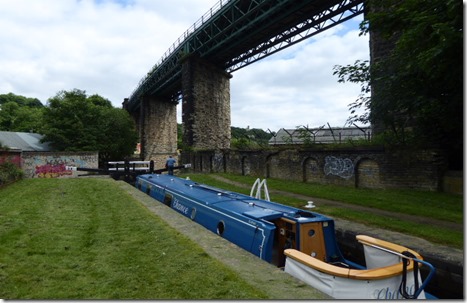 On our approach to Huddersfield the architecture gets more dominant (and so does the graffiti!). 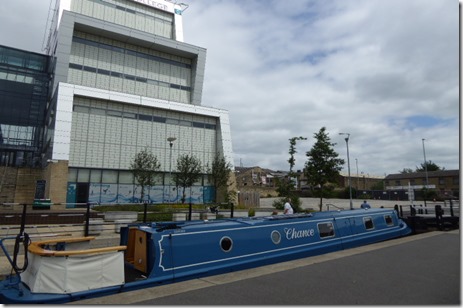 Closer still to the centre and the new buildings shout “university town”. 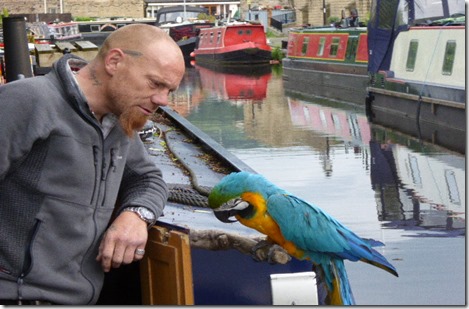 Sadly, there was not a lot of visitor mooring space. Huddersfield doesn’t seem to want to cater for visitors. Having said that, there are so few boats actually moving on this canal there’s probably no incentive to try. However, we had a nice neighbour with a very nice 17 year old macaw called “Ollie”. 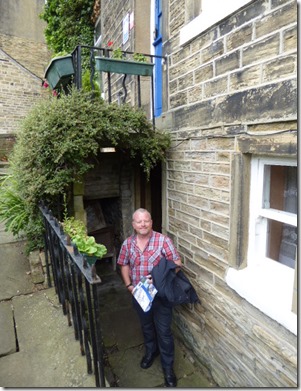 On Sunday, we caught a bus from Huddersfield to nearby Holmfirth - made famous by the popular TV series “Last of the Summer Wine”. Here’s Doug standing at Compo’s front door ……… 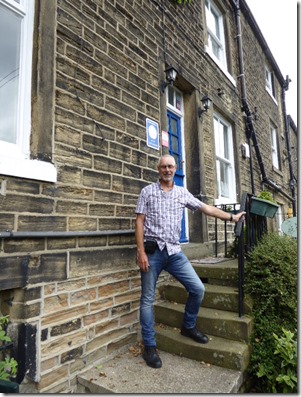 …….. and James daring to stand on Nora Batty’s steps! 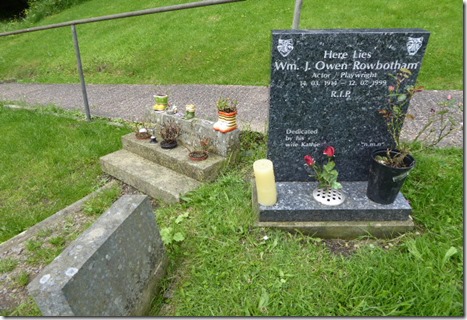 We walked up the hill to St John’s Church to find Bill Owen’s (Compo’s) resting place ………….. 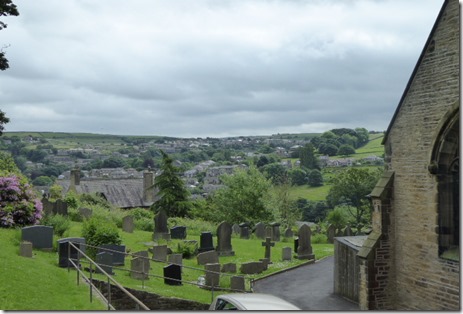 …….. where the views from his grave are simply stunning. 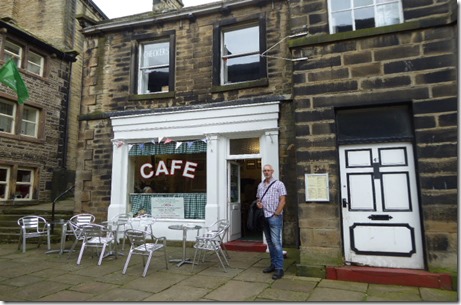 Back down into the town and we found Sid’s Café ……… 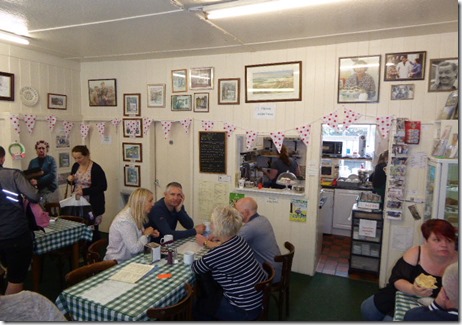 ……. and the inside hasn’t changed much either! 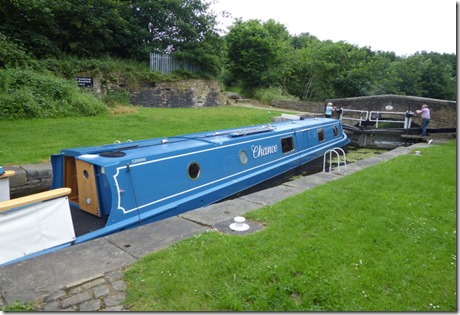 Back on the bus from Holmfirth and onto the boats, we set off from Huddersfield at 2 pm. Now cruising the Huddersfield (Broad) canal – the locks are wide enough for two narrow boats but not long enough for both to fit in and get the gates open and shut! So, we have to put one boat in at a time and go diagonally. The general “hassle factor” associated with the Huddersfield canal locks was still to dog us! 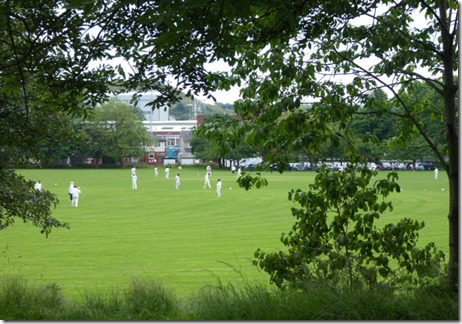 If we’d forgotten we were in Yorkshire here was something to remind us! 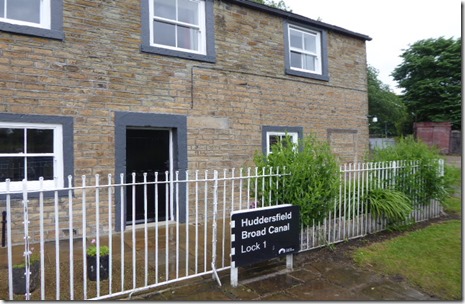 After nine locks on the Huddersfield Broad,which both “Waterlily” and “Chance” had to negotiate diagonally, we got to the end at lock No 1  …… 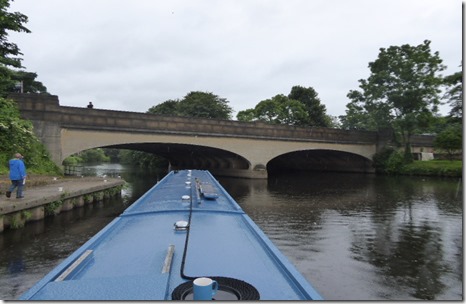 …… and then it was onto the River Calder for a 200 yard hop before getting onto the Calder and Hebble canal. 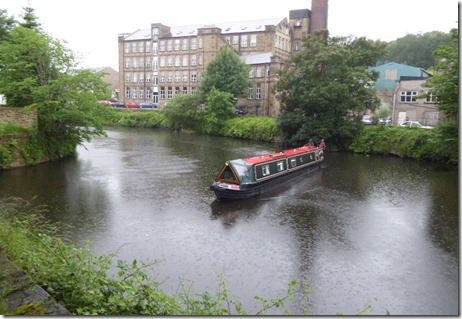 It was a ‘bloody sharp right!’ to get off the river and through the (open) flood lock onto the canal. Here’s Neil doing a terrific broadside!

The rain, which held off most of the day, was falling heavily by this point so it was a prudent decision to more up for the night on the very good visitor moorings just the other side of the flood lock.

We enjoyed a really nice meal on board “Waterlily” with Pauline and Neil. It was a triumph of ingenuity by Pauline as she doesn’t have a working oven at the moment! (and no, it wasn’t just cheese we had – that was for the 4th course!)

To have a lie in first thing that morning, then get the bus to Holmfirth and back and then do three hours cruising (which ended in the pouring rain). On top of that to have a lovely meal with friends was considered a good days ‘eventing’. It was time to call it a day.