Back on the Cut

Well, after 7 months doing “other things” this winter, we got aboard “Chance” again on Friday, and eagerly looking forward to the joys of the canals for the next few months. 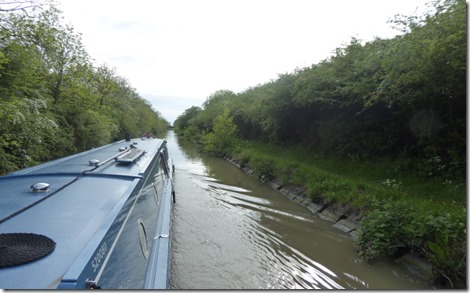 As we left Barby marina, where “Chance” had been in storage (and had faired extremely well, we were pleased to say), the freedom of the canal ahead of us took over straight away and we were off! 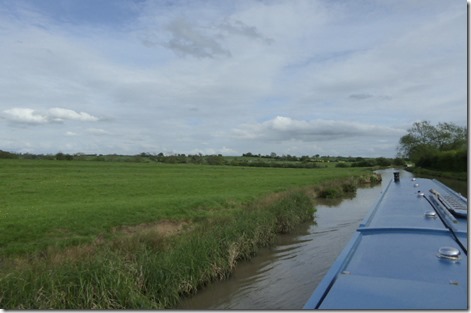 There’s something about the rolling English countryside, especially from a canal, which words can’t adequately describe. 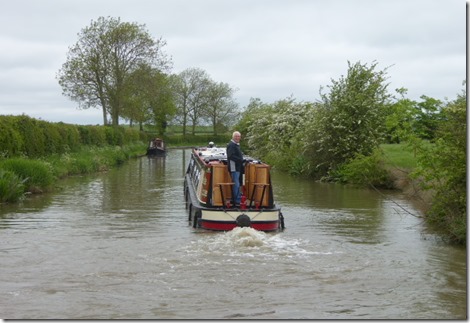 Its a small world on the cut and it wasn’t long, as we headed towards Braunston, before we passed someone we knew. It was lovely to see Steve and Denise on nb “Riverside Escape” again. 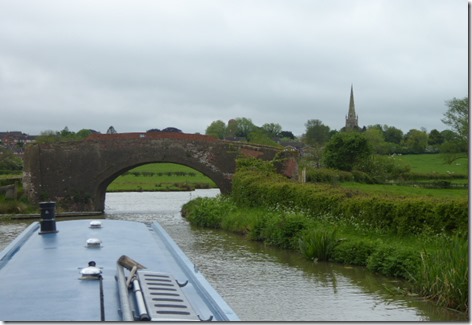 It’s a marvellous approach to Braunston with it’s church spire standing proud above the tree line. 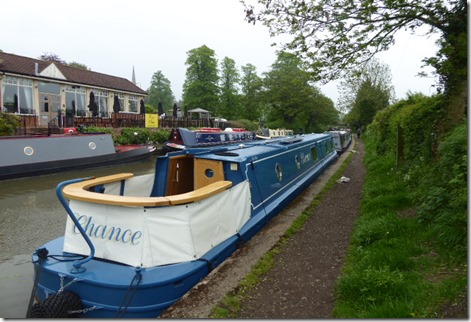 We were lucky to find a boat leaving just as we arrived in Braunston. It’s always a popular and busy place, especially on a sunny Saturday. 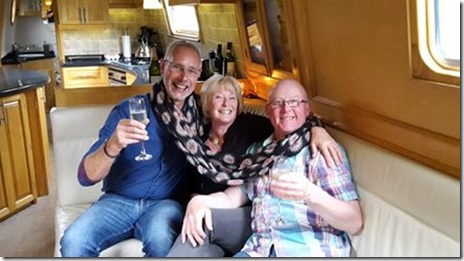 Our reason for heading straight to Braunston was to meet up with our dear friends Pauline and Neil on nb “Waterlily”. 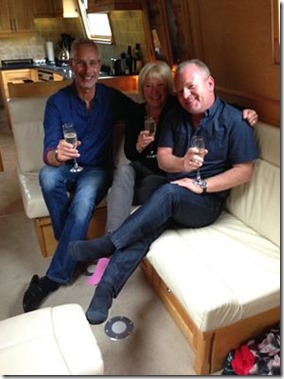 Being the undisputed “Cup Cake Queen of the Canals” Pauline had made a superb sponge cake which we enjoyed together over a cup of coffee. And yes, this picture does show us drinking Champagne! 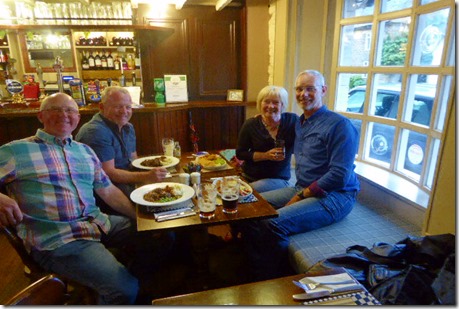 In the evening we all walked up into the village a had a very good meal at The Plough. Neil, Doug, Pauline and James. 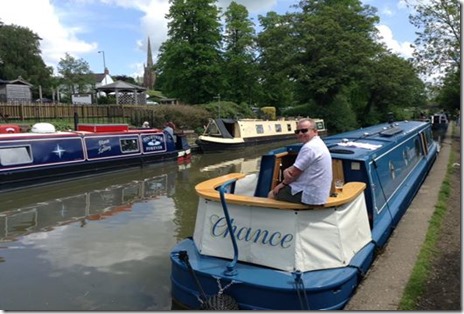 On Sunday morning Neil and Pauline left, (we shall see them again very soon) while we stayed in Braunston to await the arrival of ………… 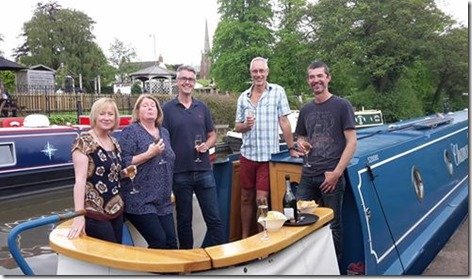 ………… friends Allison and Dave (with their friends Teresa and Gary) on nb “Free Spirit”. Of course, there was more Champagne to be enjoyed – this time courtesy of Teresa and Gary. Here we are in the sunshine – Teresa, Allison, Gary, James and Dave. 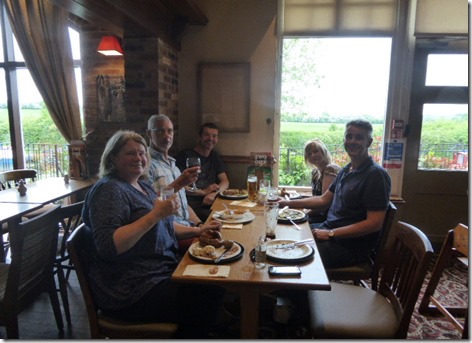 As the The Boat House was right opposite our mooring we all took the short walk for, a surprisingly good, Sunday lunch together. 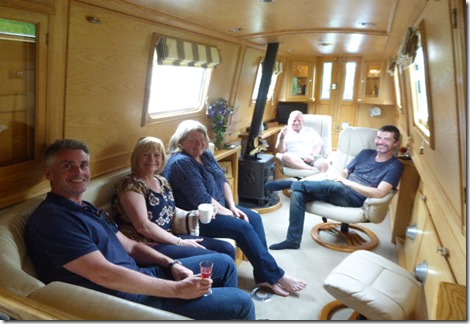 Then it was back to “Chance” for both alcoholic and non-alcoholic beverages before Teresa and Gary had to take their leave. It was very nice to meet you both. 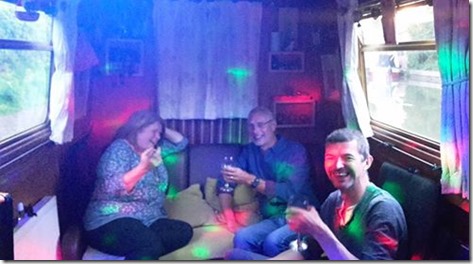 After a nice post Sunday lunch snooze we joined Allison and Dave aboard “Free Spirit” for a bit of an evening ‘party’ (complete with glitter ball no less!). However, the party was to be cut short when James, returning from “Chance” with a tray of wine, nibbles and cheese, decided to take a swim in the canal! Luckily Allison heard, what she thought was, an uncharacteristic noise and came out of the boat to find James doing the breast stroke in the dark! Raising the alarm by saying “James has fallen in the canal” she was joined by Dave, which left Doug enjoying the wine and the music and thinking it was all just a joke! Anyway, James’ life was saved by Dave and Alison and ……… 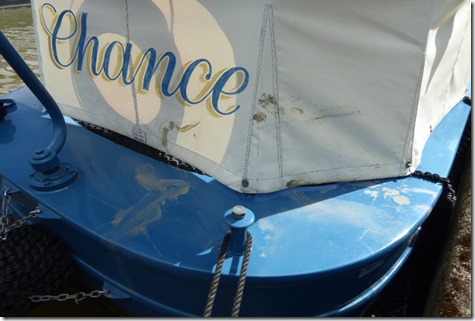 ……. the next morning there was the muddy evidence, all over the newly scrubbed dodger, of James’ scrabble to get out of the water ……… 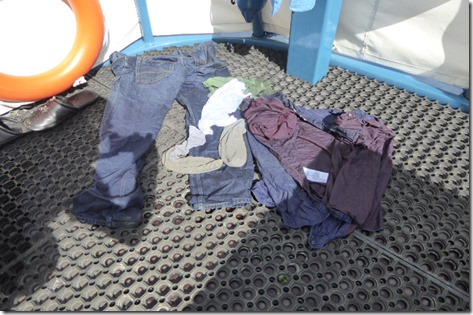 …… together with all the wet clothing. Happily, the tray, dishes, cheese and one bottle of white wine were all retrieved. The only things lost were a half bottle of red wine and James’ dignity! 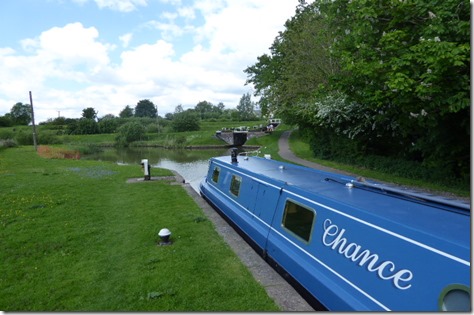 Well, it was a night to remember we have to say! and the next morning we said goodbye, with grateful thanks, to Dave and Allison as we set off in different directions. We had a good run up through Braunston locks and then the tunnel and, after turning onto the Leicester Arm of the Grand Union, we soon arrived at the Watford lock flight. 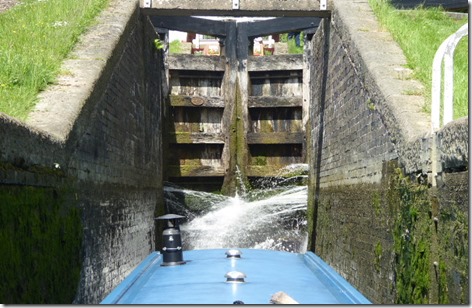 Some of gates of the Watford staircase locks seem to need some attention. We had washing out drying on the front deck here but all was well, it survived! 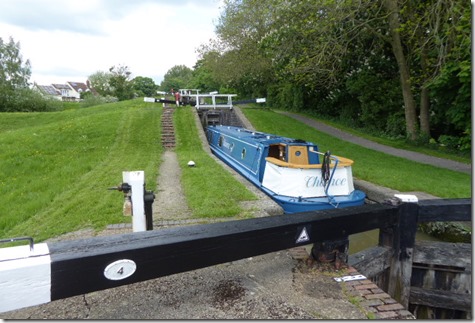 It’s always a pleasure doing the Watford locks and, apart from the noise from the M1 and the Watford Gap services on the other side of the hedge, it’s a very pleasant surrounding. 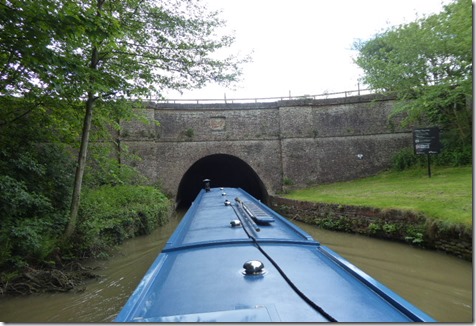 After Watford the Crick Tunnel was soon upon us and on the other side we found temporary moorings alongside the other boats preparing for the impending Crick Boat Show next weekend. 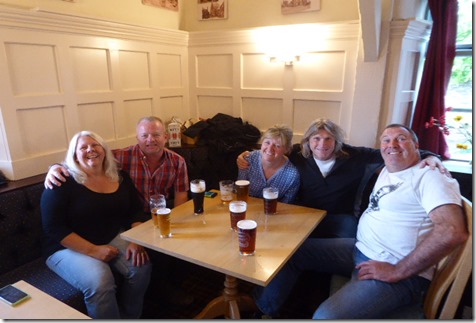 It wasn’t long before we found friends Del and Al (nb “Dewent6”) with their friends Sian and Mark at the The Wheatsheaf in Crick village. There was a lot of catching up to do and much noise being made while doing so! Alison, Doug, Sian, Mark and Del – another great evening had by all.