After our very quiet night moored at the London Canal Museum we made our way back to Paddington Basin on Friday evening due to a minor change of plan.  We needed to have ‘Chance’ moored safely for Saturday (as we were going on an exciting outing) and we couldn’t find an adequate mooring on the Regents Canal. 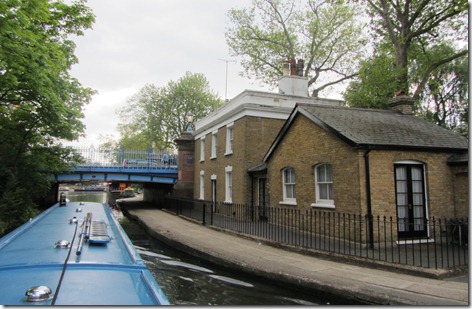 Returning back to Paddington, we enter Little Venice the scenic way. 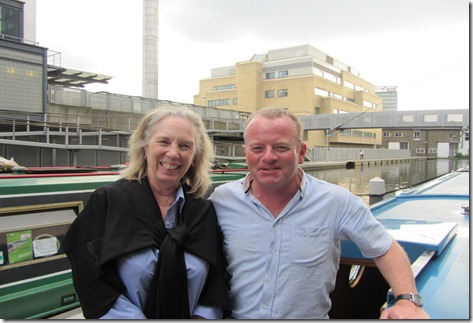 On our return to the basin at Paddington we were delighted that one of our blog readers, Valarie from nb ‘Stardust’, who was also moored in the basin, came to introduce herself.  We had an, all too short, chat with her as we were scheduled to meet up with ….. 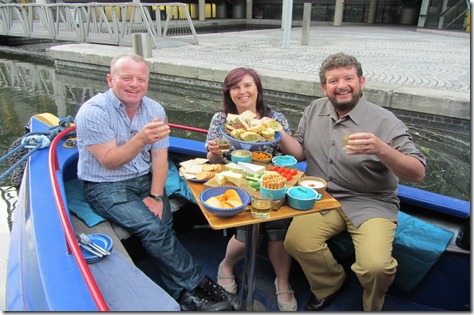 ……….. James and Debbie on nb ‘Lois Jane’ , also moored in the basin!, for drinks and supper.  It was warm enough for us to sit on their front deck and enjoy the evening, which ended up inside the boat for coffee, chocolates and liqueurs.  A big thanks to you both for a great evening.
Today we took a 7am tube to Limehouse basin to join Sue and Richard, and a few of their friends, on nb ‘Indigo Dream’ for a trip (with members of the St Pancras Cruising Club) for a trip down the Thames to Gravesend.  It was a very kind invitation by Sue and Richard which we couldn’t resist. 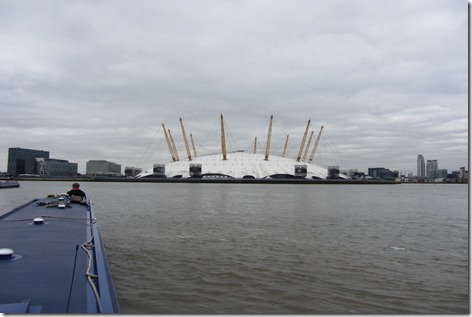 Having set off from Limehouse at about 8:30am we cruised down Bow Creek and out onto the main river.  The first landmark we saw was the O2 Arena on the opposite bank. 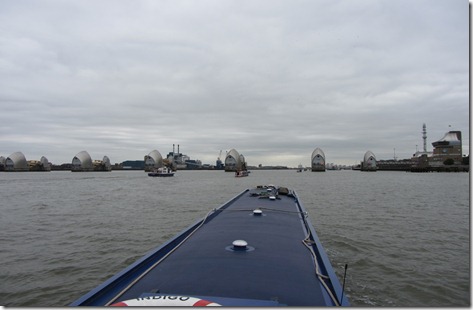 The ebb tide took us very swiftly down river and we were soon approaching the Thames Barrier. 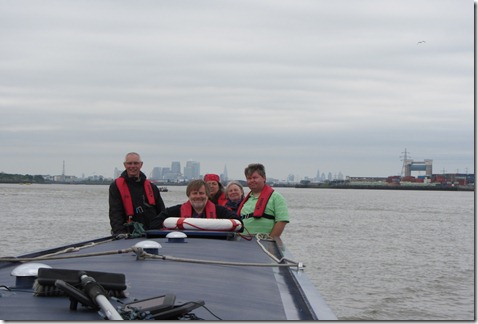 James, Richard, Sarah, Kath and Andy with the city in the background. 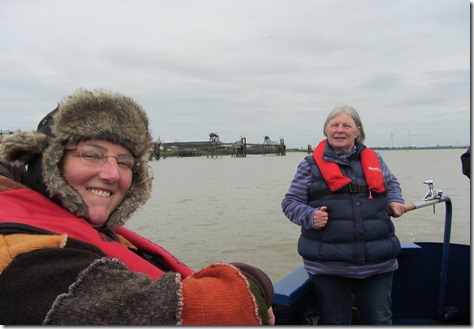 Here’s Sue, wrapped nicely for 1st June! with kath (nb ‘Herbie) steering.  We think Sue and Richard were going for the record with the most people and dogs on one boat as you’ll see. 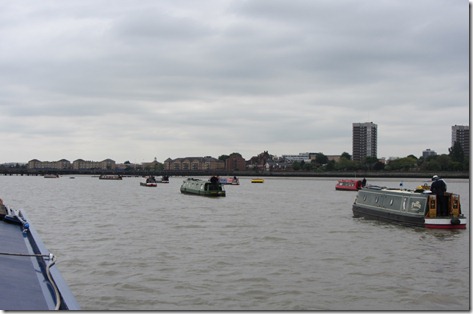 Our flotilla of narrow boats looked very tiny on the river as it got wider and wider on our journey. 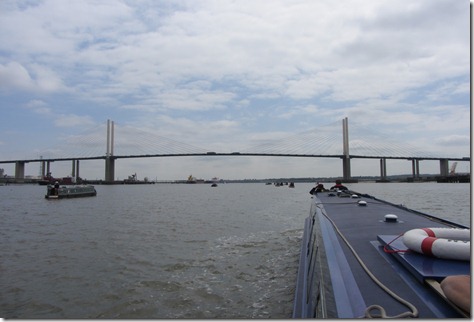 We approached the Dartford Bridge – at the point we took the photo we’re still nearly a mile away.  We were incredibly lucky to have such calm water which seemed only to highlight how small we were on such a big river. 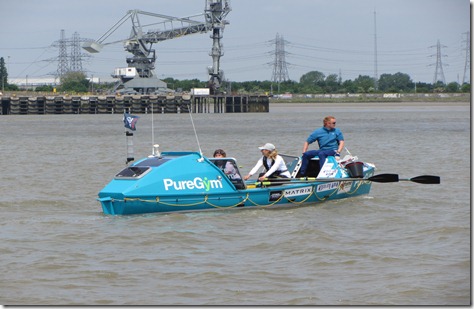 The moment we were overtaken by a rowing boat!  This was one of six sea-going boats, starting out from London, on a non stop trip around Britain and trying to break the current record.  The reason they overtook us was because we were ahead of schedule and we had to hang back to stay with the tide times. 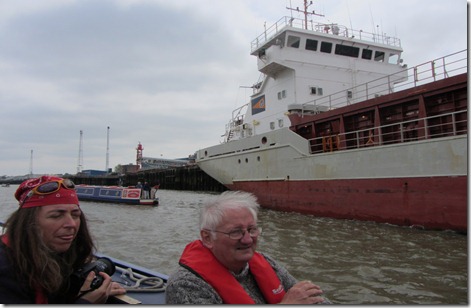 There were some very big boats around.  This is Sarah, the owner of four of the five greyhounds on board today!, and Neil, (Kath’s husband). 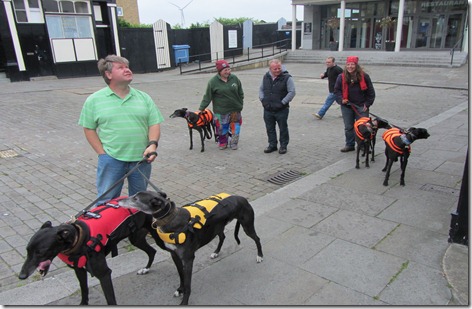 Having arrived at Gravesend we temporarily moored on the ferry dock to get all the dogs off for a well overdue pee!  Andy (co owner of the four dogs) with Sue, Doug and Sarah. 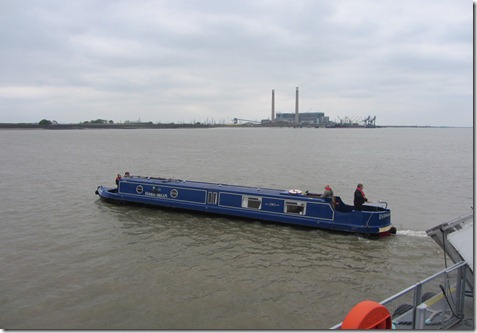 ‘Indigo Dream’ leaving the ferry dock after dropping us off . 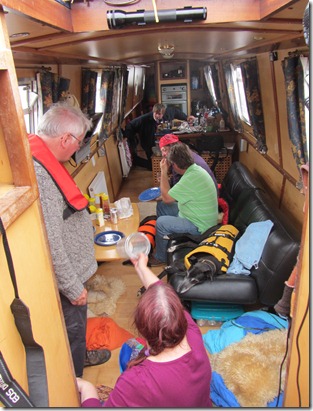 Back on board ‘Indigo Dream’  for a late lunch. Everybody enjoyed and appreciated the food which Sue kindly provided. 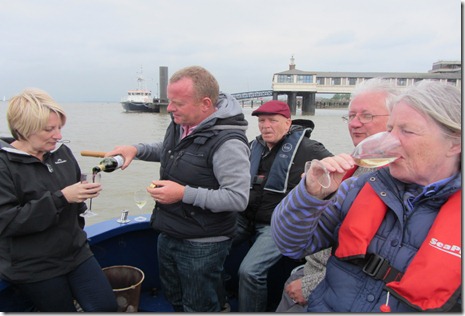 After that it was wine and Champagne (on the back and front decks!) – Jan and Kevin, who live on their narrow boat near Limehouse Basin, with Doug refilling everyone’s glasses.  Neil and Kath on the right (sorry Kath!) 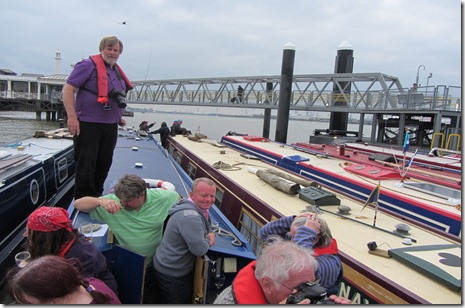 A throng of boats and people – six-a-breast and that was just the people! Richard on the roof. 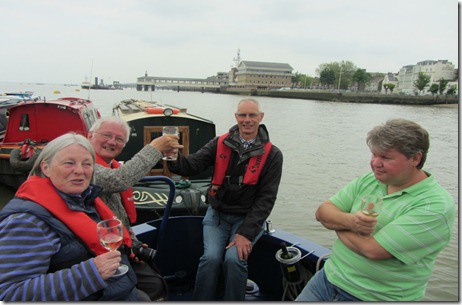 It was a full time job keeping the glasses topped up. 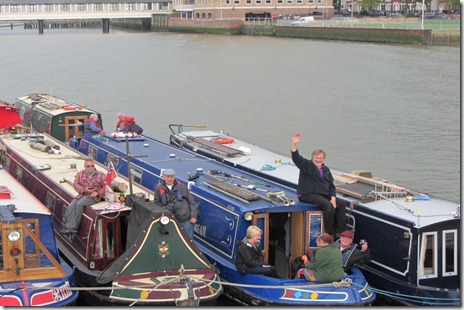 We very much enjoyed the trip today and the wonderful company of everyone there.  We left at about 6:30 to get the train back to Paddington…… 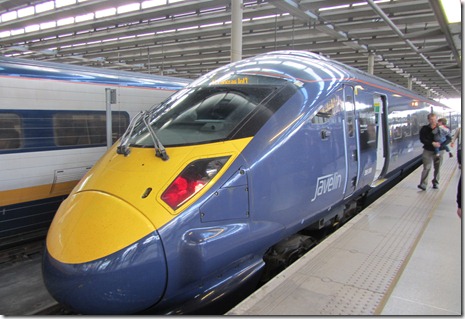 …… which was another special journey – on the new high speed Javelin train which we were informed, by the conductor, was doing 140 mph on a couple of stretches between Gravesend and St Pancras.
We’ve had a fantastic day today and we send enormous thanks to Sue and Richard for the invitation to join them, we wish them a safe night at Gravesend and a good journey back tomorrow.
Posted by nb Chance at Saturday, June 01, 2013